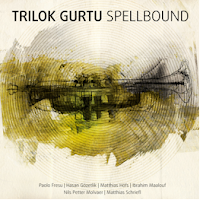 At the beginning of “A World of Sound“, a short film by the David Lynch Foundation about the late great David S. Ware, Ware says: “You know, I am not interested in chord changes … playing chord changes .. I don’t need that. I work on concepts, very subtle ideas.” You must see how he says the word “chord changes”, he pronounces it full of contempt - like “shit”. Trilok Gurtu’s album Spellbound is full of chord changes.

What the album might have been like can be heard at the short snippet recorded live by and with Don Cherry which opens the album – a 30-second-duo-improvisation with Cherry on trumpet and Gurtu on percussion. The rest is – as one of the reviewers on the team mentioned – fusion crap.

Spellbound is a homage to trumpeters (especially to Cherry) and it is moving through originals and pieces by Cherry, Dizzy Gillespie and Miles Davis interpreted by various stars of the scene like Nils Petter Molvaer, Ibrahim Maalouf, Paolo Fresu, Ambrose Akinmusire and others.

But while their playing is sometimes even okay (e.g. Nils Petter Molvaer in the only halfway interesting track “Jack Johnson”) it is the rhythm section which is the problem. The pieces are often caked up with ugly synthesizer and keyboard sounds (and/or with hideous unison bass/trumpet runs and horrible vocal parts) and a hard-to-bear 1980s electric bass (especially bad in the title track). Everything is obvious, there is no subtlety, no concept or surprise. The worst tracks are “Cuckoo” in its cheesy Latin American style, Dizzy Gillepie’s Afro-Cuban classic “Manteca” and finally Don Cherry’s “Cosmic Roundabout/Brown Rice” which is spoilt again by the electric bass and the arrangement in general.

The problem of the album is that it is all about musical skills, there is no soul in any of the tracks (except the Cherry snippet, of course). John Lennon once called such music in a very pejorative voice “muzak”. The means (showing off what great musicians they are) are more important than the end. In an interview Gurtu said that the idea behind this CD was to present a message, he emphasized the spiritual aspect the music should have. I cannot see any message or spirituality here – just chord changes.

You can achieve a spiritual place playing on chord changes if you know how. Many of the free-from players don't or are not interested in exploring that aspect of improvisation
which I feel is very limiting in their creativity.

I agree with Dom, chord changes don't necessarily mean no spirituality. If we dish chord changes it means ignoring a good two thirds of all music on the planet, which I'm sure you didn't intend to imply.

I haven't heard the Trilok Gurtu album, and probably won't bother anyhow. But I did listen to the soundclips on the labels website and it sounded like a derivative of late Weather Report type of fusion. Fusion has always split the jazz community down the middle, even in the day of Miles people said "that's not jazz". Interestingly his fusion fusion stlye came from a very improvised area, just listen to the early electric bands live. But I guess we'll just have to except that you either love it or hate it.

My opinion : there is good fusion and bad fusion. Weather Report has done fantastic things, as did Miles or McLaughlin, but most of the times it is just a display of technical and instrumental skills camouflaging a lack of musical creativity and vision. This Gurtu album suffers from the same disease.

I gave Spellbound a chance. My opinion is that focusing on chord changes is in some way a "wishful thinking". In a long career releasing an album shouldn't be necessary if you don't have anything important to say, or at least you don't write on your website "with the music on his new album the percussionist succeeds in something that nowadays is unusual and indeed rare: building a bridges between the continents and cultures".
Come on, I understand this is promotion, but are we talking of the same continents and cultures, or even of the same planet? I wouldn't say this is fusion either. In particular some of the keyboards sounds and passages were to be considered poor even 30 years ago.

I know that I am polemic about this album, forgive me. Actually I am not against chord changes at all (I just used Mr Ware’s statement because it seems to be the concrete opposite to this music), not even against fusion. I love the relevant Miles albums, McLaughlin’s Inner Mounting Flame is great etc. It is true, this music has always split the jazz community. The album reminded me of some records I really don’t like, e.g. Al Di Meola’s Elegant Gypsy, Larry Carlton’s self-titled debut, or Chuck Mangione’s Feels So Good, to name a few. I also have my problems with Weather Report and Return to Forever, true that. But it seems to me that especially the originals on this album just want to prove how well these people can play, it’s not the track they seem to be interested in, it seems to be about mere musicianship. Unfortunately, this all sounds pretty lame and I agree with Stef here. I know that the review is negative but I didn’t want to hurt people, certainly not. However, it’s definitely not my cup of tea.

I certainly didn't think you were against chord changes, nor against 'fusion' oriented music.

As for being negative, well I remember reading some other 2 star reviews on the blog, look up Andy Sheppard and you'll see the similarities. They're not negative reviews, I see them as being honest. if you don't like it why say you do.

As for the album in question I haven't heard it.