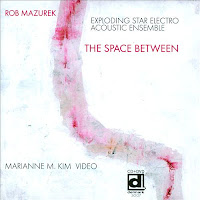 Cornetist Ron Mazurek's The Space Between caught me off guard. Coming off of the Skull Sessions and the Pulsar Quartet, I had certain expectations, but after giving it spin, I found the oscillating electronics and instrumental fragments delightfully confounding.

Digging around the Internet, I found the context I was looking for on the Exploding Star Electro Acoustic Ensemble:

"Commissioned by Meet the Composer Commissioning Music/USA,The Space Between is a multimedia interdisciplinary project utilizing sound, video and movement based on the idea of Psychedelic Illumination Drones. As the image and sound develop an ongoing conversation, Mazurek manipulates and accumulates sound layers in an attempt to relocate where sound can be experienced and embodied, while Kim creates a visual environment through the metaphor of the reflective nature of the Indra Net." (http://www.robmazurek.com/news/113/)

After reflecting on that statement, I realized that my issue was that I had been experiencing this in mp3 format without the visual context.  The CD versions comes with a DVD containing the work of choreographer and video artist Marianne M. Kim. Regardless, the music comes from everywhere and dissipates into nothingness. Evocative and ephemeral, you just want to reach out and grab it. Though electronics dominate the beginning songs, they mesh seamlessly and eventually give ground to the acoustic instruments. Suffice to say, this recording stands well on its own, but at the same time, one of its triumphs is how well it suggests a visual experience.

The subject matter has to do with oneness and interconnectedness within the universe, and to that point,  I'll just say that the musicians and the electronics mix seamlessly. From Mazurek's Sao Paolo Underground, Mauricio Takara and Guilherme Granado contribute electronics and electric cavaquinho. Nicole Mitchell is on flute, Jeff Kowalkowski on keyboards, John Herndon is on drums, Carrie Biolo adds percussion and Matt Bauder provides more electronics. Damon Locks' recitation of poetry on some of the tracks lends a foreboding air which fits the dark and free form atmosphere perfectly.

It seems that many of Mazurek's projects are deep and thoughtful, and this one is no different. The soundscapes, the textures, the mix of electronics and acoustics are done impeccably. Overall, The Space Between makes for a fascinating listen, and I'm willing to venture that with the visual component added, it's an enveloping one. My only complaint is that I wish there was a little more to grab on to, with so much atmosphere and set up,  I hoped for a Nils Petter Molvaer type of climax at some point. But as it is, sounds sail through the ears, textures and layers tease the mind, and the imagination adds the other dimensions. I think the music achieves its goal.

As Stef himself stated a few years back: "Rob Mazurek is something of a genius."

I wholeheartedly agree, and am looking forward to seeing him in a variety of contexts (with the Sao Paulo Underground, with Pharoah Sanders, AND in an improvising workshop as part of the colloquium)at the Guelph Jazz Fest here in Ontario this September.

Just purchased this CD/DVD package and salivating to hear it.

Just getting around to listening to this, and it's absolutely gorgeous. I rather like the ethereal, ephemeral nature of the music. It disappears as soon as I grasp it, perfectly encapsulated by the title "space between."