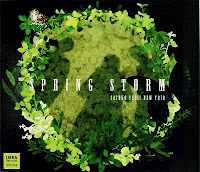 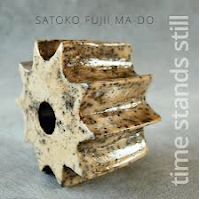 I was fortunate enough to see Satoko Fujii Ma-Do in June of 2011 (it’s uncommon for prominent jazz musicians to make their way up to Maine, let alone prominent international musicians). Just two days before, the quartet had recorded Time Stands Still in New York City, and a mere three months later bassist Norikatsu Koreyasu passed away, prompting the dissolution of the group. The New Trio soon formed as a vehicle for Fujii’s small ensemble compositions, a “standard” piano trio featuring young drummer Takashi Itani and bassist Todd Nicholson, who had previously relocated to Tokyo. Spring Storm is their first album, released at nearly the same time as Ma-Do’s swan song.

Fujii’s small groups have always placed rhythm in the foreground: her pieces oscillate between sturdy, regimented grooves and spiraling, unmoored freedom. In this respect, the differences between Time Stands Still and Spring Storm are slight; Horikoshi tends towards short bursts of emphasis, while Itani’s drumming is more of a mass accumulation of sound. Both approach Fujii’s music from a similar, energetic angle. Likewise for Nicholson and Koreyasu, two workhorse bassists who bring a swing feel to even the wildest climes. When they pull out their bows, Nicholson is weak in the knees, woozy and sad. Late in Spring Storm, his long arco song on “Maebure” is an arresting change in pace. Koreyasu’s bow is what allowed him to be most free; “Fortitude” captures well his soaring, idiosyncratic bow work, like the very soul of the bass itself trying to leave its constrictive wooden body, a wild twisting spirit that builds a parallel tension to the staccato vamp the rest of the band hammers out.

And Fujii—well, Fujii has her usual moments of unbearably catchy syncopation, the dense clots of sound, the brilliant lyrical turns in the midst of what seems to be barely-controlled chaos. You always know what to expect with her. This isn't a slight against an improviser—the unpredictable nature of improvised music is a standard that holds up best when improvisation is compared with other forms of music. Considered within improvisation, a certain notion of "what to expect" (even if we can't always put it into words) is exactly what allows us to pinpoint our favorite musicians, or feel excited when we see a collaboration of artists we’ve never heard play together. Consistency is her hallmark. One listen to “Broken Time” from Time Stands Still, as perfect an encapsulation of Fujii as one could hope to find, makes a strong argument. Even if you're inclined to say she's treading the same ground with Time Stands Still and Spring Storm, that'd be unfair: what she's really done over the years is refined an approach, mastered a methodology that continually delivers the goods.

And these albums are great, both of them. It’s tempting to dismiss the New Trio as Ma-Do without Natsuki Tamura’s mighty trumpet, but that would be missing the whole picture. Blustery tracks like “Fuki” remind us that we’re working in different spaces, with different musicians: when the rhythm section comes back in after a solo piano spot halfway though, it sounds like someone trying to tear down a building with hand tools. It’s a level of intensity that’s not so much beyond Ma-Do as of an entirely different cast.

I always come back to the idea of ma when faced with Fujii’s music. It’s a concept she likes to invoke. It’s slippery though, more robust than simple translations often suggest: something like the natural space we perceive between things, or the interval that exists between two phenomena. Perhaps what we should listen for when we listen to these albums is this idea of ma: with Spring Storm, what the interval between groups means, and the manifestation of space between musicians newly working together. With Time Stands Still, the natural pauses in the conversation between good friends, one of their last, and maybe even the space between Ma-Do and we listeners, once we realize we’re listening to a ghost, to the sounds made by an absence.


Can be purchased from instantjazz.com.
Paul on Wednesday, June 19, 2013
Share