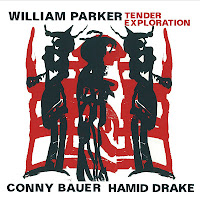 In the late 1990s, when there was the big discussion between Wynton Marsalis and Stanley Crouch on the one hand and Lester Bowie and the free jazz community on the other hand, in which Marsalis/Crouch claimed that free jazz is no jazz because it did not swing, I saw the Die like a Dog quartet (Brötzmann/Kondo/Parker/Drake) in a movie theater in Essen. It was the first time that I saw this rhythm section live – and boy, did they swing.

What they have done for free jazz in the last 30 years cannot be praised highly enough (for example their work with Fred Anderson and Kidd Jordan), for this kind of music they are what Sly Dunbar and Robbie Shakespeare are for Reggae or Bootsy Collins and Jerome “Bigfoot” Brailey for P-Funk – rhythm twins.

For this album they asked Conny Bauer to form a new and unusual trio, which has been a very good choice for several reasons: Bauer (like his younger brother Johannes) is an excellent trombonist, who was educated in the former GDR (and if you wanted to be a musician there you had to have a proper musical education), he has played with almost everyone in the European and American improvisers’ scene, and he is open for any kind of new experiences.

“Tender Exploration” reminds me of Hayao Miyazaki’s “Howl’s Moving Castle”, it’s an enormous metallic machine on spindly legs, walking like a toddler, but also steaming, mumbling,  panting, a creature full of energy, and inhabited by a fire demon.  “Drake”, the first track”, starts seeking for a structure almost clumsily, the band members seem to have to find each other. But soon they have a good chemistry and Bauer, who dominates this piece in spite of its name, adds his huge repertoire of techniques including German march and parade music, circus melodies, bop, new music and free improvisation to the complicated and varied rhythms. “Parker”, a four-minute-bass-solo-interlude, then functions as the bridge to “Bauer”, the last track, which exemplarily lives from the clash between Parker’s and Drake’s African jungle rhythms and Bauer’s European heritage. It is a constant puzzle in which the individual musicians try to uphold the structure in turns, Bauer with a rock riff played on the trombone, Parker/Drake with a tightly knit web of difficult rhythms leading into a marvelous duet in the middle of the track. Every now and then the whole thing is about to fall apart but they always manage to get it on track.