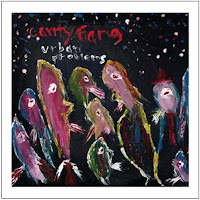 Here's Michael Coleman back with another one of his very interesting cross fusion projects. I've reviewed several different projects of Michael over the years and each one always has some very interesting stuff on it. The last one reviewed here was Arts and Science on Aram Shelton's Singlespeed label. This is another small label Table and Chairs, based I think in Seattle. They - the label - seem to specialise in a very interesting blend of modern/rock/jazz/noise, take a look at their website and bandcamp to get a better idea (and listen).

Meanwhile, the music of Cavity Fang is again a real collection of ideas that Michael Coleman successfully moulds together to produce some very modern sounds. If you like music such as Steve Reich meets Hendrix meets Mahavishnu but without any of the long solos then you'll definitely enjoy this one. In fact the record is very short but the music is intense and packed with ideas and melodies. "Koala and Joey" (tk1) is like an rubato anthem that lies somewhere between the Star Spangled Banner and ..? But by the next tune - "Dreamzz" - you're already in another abstract world, rhythmically complex lines meld together leading you into choppy riffs, which somehow reminded me of a Beefheart instrumental. The whole record moves along like this with new ideas and ambiances jumping out at each track. "Armadillo" (tk3) starts out with a soundtrack of jungle noises, but surely made by synths, keyboards and percussion. Eventually Jordan Glenn - drums and vibraphone - brings in a melody lines on vibes developing into a long repetitive line full of energy.

Some of the music reminds me of the way Fond of Tigers (what happened to them?) layered melodies on melodies to produce new lines. The other aspect that links the two bands together is the three drummers! You get to hear them work out together as they build up a very carefully constructed set of lines on "Prelude to Rara" (tk5) which leads into "Rara", naturally! Looping sax and heavily flanged guitar seem to set up the scene for even more relentless drumming. The last three tracks hang somewhere between garage band rock and sophisticated psychedelia with melodies that use flute and guitar on "This Will Be Your Bed" (tk8). "Droopy-Eyed Monster Shuffle" finishes the album with some grumpy sounding baritone sax riffing away before heading into outer space, exactly what it says it is a monster shuffle!

This is a long way from being a jazz album, but then again it certainly doesn't really fit easily into any category! Drop by the bandcamp website where you can take a listen to the album, see what you make of it or/and buy it: ::: here :::