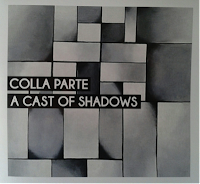 Colla Parte is, according to the musical terminology, the instruction for accompanists to follow the lead of a solo performer. The trio features double bassist Daniel Barbiero, flutist Perry Conticchio and vibraphonist/percussionist Rich O’Meara and it is here on its second release after the convincing debut “Field/Figures” in 2011. The reference environment whence the group’s name comes from, to be found mainly in classical music, gives us some valid clues to Colla Parte’s compositional conception. The personal jazz and experimental heritages of the members, as much as their different improvising attitudes, are melded and linked from a binding classical background. The use of shared structures as counterpoint and the constant turnover of the leading voices gives to this small ensemble the chance to build a rich musical environment that is pretty well balanced between chamber music, highly lyrical peaks and incisive interplays, and at the same time not miss freedom and spontaneity in an organized contest.

The strongly cinematic atmosphere of the opening track lies on a substratum of double bass low and bowed waves together with distant “electronic” vibraphone touches provided by O’Meara (it reminds me of someone who is walking and whistling), over which Conticchio’s sax moves warmly, providing melodic phrasings or scattered inlays. The tone of Conticchio, who has a 35-year career including performances with Don Cherry and Anthony Braxton, is warm and enveloping, while Barbiero and O’Meara are at ease switching between the polyphonic scenario springing from their bowing and mallet percussions in the second track to the thin and fitting frame they provide in the third episode working on pizzicato, drums and cymbals. Obviously, following the evolution of their titles (Antumbra/Penubra/Umbra – which are the Latin names given to three distinct parts of a shadow), this opening triptych is not just a manifesto of the band’s purpose to explore contrasts of lights and shadows, but also a prelude to the central composition of this work, the self-titled (and logically consequent) 35 minute “A Cast Of Shadow”. Growing in humus sprinkled with ethnic metallic and wooden percussions and austere bass bowing, the ethereal presence of the flute is soon replaced by the sax, establishing a thick dialogue made up of short phrases with the constant presence of the double bass (even when it goes pizzicato). Barbiero, as in his former solo work, unsheathes his contemporary and avant-garde vision, and supplies a non invasive but fundamental trestle during the whole development of the piece. This long suite deserves deep listening and concentration, the musicians never choose eruptions and easy climaxes, and they always maintain control over their outputs. The last third of “Cast of Shadow” is rhythmically more challenging and traditional jazz oriented, but the main and most interesting aspect of Colla Parte’s music keep on being the capacity for alternating musical registers and genres with no fractures but rather with the creation of an harmonized, coherent and original musical universe.

The chilling coda drives us out from this intense listening experience.


Conticchio and Barbiero web pages for other sound clips and to buy the record.