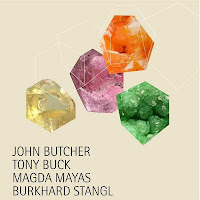 Although presented as a quartet recording, the album actually contains two trio performances. The first track "Fiamme" has John Butcher on saxophones, Tony Buck on drums and Burkhard Stangl on guitar. The second track, "Vellum" is improvised by John Butcher and Tony Buck, but now with Magda Mayas on piano.

As can be expected, both trios shape sonic intensity, with long moments when barely anything can be heard but wind and faraway rustling, a dronelike almost-silence that slowly waves back and forth in terms of volume and density, with a peak of Butcher's instrument being voiced halfway the first track, only to disappear again into the quiet soundscape.

The trio with Magda Mayas is more energetic, with the pianist playing mostly inside her instrument, actually joining the percussive effects of Buck. Butcher's playing has a more plaintive quality, or a sustained yearning if you want, shifting between distress and exaltation, coloring and shading his sounds, as the intensity grows. Strangely enough, by the end of the almost fourty minutes, a kind of reconciliation takes place with all three instruments - sax, piano and drums - sounding as they were originally intended to be, even if the music is far from what these instruments have produced ever before, and even then it is a heartfelt finale.

A strange album, one that you can listen to very often,

You can listen and buy it from CDBaby.