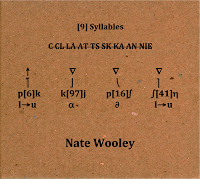 Fine! What you see is not what you get, or I should say what you hear is not what it used to be, maybe. With an homologous set of his former solo efforts, the self-declarative Trumper/Amplifier (2010), the challenging The Almond and the obviously connected (8) Syllables (2011), Nate Wooley, alongside his flourishing musical action in various line-up, keeps on with his solid work of destructuration and transfiguration of the deepest nature of the most traditional among the brasses, focusing again on the nodal role of oral language intended as a compositional approach.

As in (8) Syllables Wooley works applying to the embouchure of the trumpet various positions of his tongue, lips and throat in relation to nine specific phonemes - as reported on the cover of the release utilizing a graphic representation of the International Phonetic Alphabet (IPA) - giving consequently birth to a fifty minutes long suite divided in nine parts, one for each syllable. Starting from this conception he creates parameters of attack, body and decay for each sound. As Wooley has formerly explained “the idea has never been to control the elements of the embouchure, mouth, throat, tongue, but to allow them to operate in an environment of their own, separated from their typical roles in the production of sound”. The listener is then catapulted in a universe of layered textures, contrasting vibratos and undulating hues where every physical element of the instrument itself acquires a relevant role, from the ring of the bell up to the palpable movement of the mechanics of the valves.

Wooley’s purpose seems to be, more than the development of a composition, the ignition of a series of sound activities overlapping one on the other and interacting in a dramatic coexistence. Tones, hisses, sound shreds, scrapes, growls and groans are transformed into circuitous trumpet lines getting lost and winding up in unexpected peaks.

Another major aspect of the release is the interaction surfacing from the juxtaposition of the human output to its electric counterpart, the amplifier. The trembling, engine-like, perpetual background presence, the flux of buzzes, cackles and unpredicted clangs establishes the trestle for the ethereal sketches, the canvas for the brushes of the voice that moans and howls amid raucous outbursts.

Released as a limited edition CD or as very affordable digital format available directly from the label.