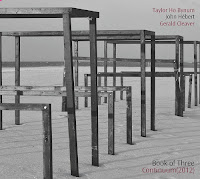 Book of Three comprises Taylor Ho Bynum (cornet), John Hébert (double bass) and Gerald Cleaver (drums). Their eponymous release from 2010 was a study in quiet intensity, played with a faultless sense of tone and scale. Bynum’s fragile – sometimes, almost frozen – lines (accentuated by the use of cornet and flugelhorn) were suspended over Hébert’s lean bass and Cleaver’s delicately shaded drumming, to produce a set of solemn, but eloquent conversations. The performances on this release – recorded some two years later – retain that character, but with the addition of improvisations based on composed material on four tracks.

On occasions Bynum’s playing is so soft it resembles nothing more than coloured breath, in music that is stripped to the bone: an exercise in how much can be eliminated without compromising musical substance. In Open City Cleaver restricts himself to mallets over which Bynum’s smeared and fractured phrases – hung in stasis – carry on an intimate dialogue with Hébert’s arco bass At the end a sort of resolution is achieved with a simple drum pattern and col legno rhythm accompanying a tiny melody on cornet.

Jim Hobbs’ Aware of Vacuity (first heard on the Fully Celebrated Orchestra’s 2002 release: Marriage of Heaven and Earth) begins with slow motion allusions to the theme, stretched over bowed bass and brushes before the simple six-note tune is quoted in full on the bass. The trio return to literal statements of the tune between excursions into more extreme areas.

The title: Continuum, suggests a development from the previous recording, but perhaps also a lineage from earlier jazz. To my ears, the thematic improvisations – and even parts of the freely improvised pieces – share an approach pioneered by the Miles Davis Quintet of 64 – 68, what Wayne Shorter has brilliantly described as “working with the DNA of a tune”. Many of the features of that great quintet (particularly in live performance) are present in the opening number – Bobby Bradford’s jaunty Comin’ On – in which phrases are contracted and expanded over Hébert and Cleaver’s metrical shifts and slides. Hébert comes at the tune from an oblique angle during an extended bass passage (“solo” would misrepresent the trio’s dynamics) where what is omitted or implied, is as important as the actual notes played. Similarly, in Jamila, by Salim Washington, the trio shifts in and out of tempo, stable then floating. Journal Square Complications is a free improvisation, but there are clear melodic cells, gestures and contours, subjected to Bynum’s fiercely focused playing, particularly in the closing minutes, spurred on by the propulsive rhythm section.

In Cleaver’s "Henry", bass and drums weave a web of detail around the slow, mournful theme: as if two different, but related sound worlds have been drawn together. The tune is reprised at the close of the final piece, over a soft cymbal wash, etched in spare phrases from Bynum. With masterful playing throughout, this is strongly recommended, and as a bonus, there’s a live performance by the trio – from the night before the recording of their first release – at Bynum’s website.

In my review of their first album "Book of Three", released in 2010, I tried to capture the "unbearable lightness" of this trio's music, and their approach is still the same, one of unhurried and gentle sensitive freedom, very welcoming to the ears due to the traditional use of the instruments, ie without extended techniques, yet totally open-minded to themes and collective improvisation.

The trio is Taylor Ho Bynum on cornet, John Hébert on bass and Gerald Cleaver on drums, names who need no further introduction, and the fact that Ho Bynum restricts himself to only one horn on this album, even increases the coherence that was already strong on the previous album.

And it is jazz, very much so, in its sound, its sense of pulse, even if slow at times, in its harmonic dynamics, in its very sound. Three tracks are based on compositions by other artists, Bobby Bradford, Jim Hobbs and Salim Washington.

The first track, Bradford's "Comin' On", still has this boppish feel to it, but then in a very stretched out way, full of bluesy sensitivities, with the three musicians keeping the main theme as the anchor point, but then straying away from it - rhythmically, melodically - without losing sight of what they're playing, and as on the first album, the overall sound is truly a trio effort. The cornet may have the clearest voice, but the actual sound and evolution of the track is a real group thing.

The second track "Aware of Vacuity" comes from the "Marriage Of Heaven And Earth" album by the Fully Celebrated Orchestra, one of the many successful bands to which the cornettist contributed, bringing a somewhat faster and less tribal rendition of the original. It starts with moaning arco by Hébert, with the muted horn offering some distant echo, slightly introducing the theme, and then the tempo increases and the theme really kicks in. Of all the tracks on the album, it's possibly the one that is easiest to recognise because of the long repetitions of the theme.

"Henry" a composition by Cleaver is a more abstract ballad, originally on his "Detroit" release, and in my opinion closer to the trio's musical vision. Cleaver's playing is Motian-like, creating a percussive space, emphasising, leading, contrasting, without actually explicitly setting a rhythm. Over his and Hébert's foundation, the cornet weaves slow and sad phrases.

The fun in my opinion really starts with the trio improvisations. "Open City" is the first one. It starts with low rumbling on the toms, a few high pitched squeals from the cornet, echoed by the arco bass, then when Cleaver increases his volume, the bass goes to the lower regions, dragging the cornet to the same register for some intense soundscaping, leaving lots of open spaces for their music to resonate.

"Jamila" by Salim Washington has a boppish base and harmonics, but the trio again gives it so much space and breath, changing rhythm and tempo along the way.

The best tracks, however, are kept till the very end. "Journal Square Complications" is a wayward piece, as free as it gets, with intense interplay and some angry growling by the cornet, and lots of space for bass and drums, one that again shifts in tempo and approach, with all three musicians moving as one.

"Precoda" starts with all three instruments playing sustained tones in a minimalist way, barely audible at times, creating an ominous atmosphere of suppressed tension, the soundtrack to a horror scene, before Cleaver's "Henry" gets a reprise, calmer and even more abstract.

In sum, this is an album you don't want to miss, played by three artists in the best of forms, offering an interesting and jazzy take on modern music, or redefining jazz in today's world, sensitive, artful, thoughtful, extremely well-paced and in the end also very accessible. No musical evolution by creating shock waves, but by taking what exists a step further into a sound we really want to hear more of.

Listen to "Comin' On"