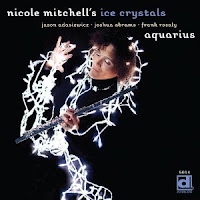 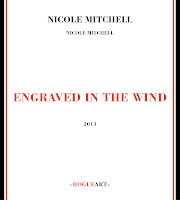 Some folks might get misty-eyed over the Cubs or the Bears, but for me Chicago is Jazz.
Is there a more fertile ground for free improvisational music than Chicago?  Since the inception of the AACM - I know Sun Ra started there earlier, but it seems disrespectful to say his professional beginnings were in Chicago rather than Saturn - the city has been the birthplace of so much free music of towering importance it boggles the mind.  It's had its lows and highs over several decades, but the city's free sound has remained influential for roughly fifty years.  While Mitchell has moved to the west coast to accept a teaching position at the University of California, Chicago remains at the heart of her music.  All of the other members of her quartet, Ice Crystal, are still based on the shores of Lake Michigan.  In its typically unfussy, down-to-business Midwestern fashion, Ice Crystal has nothing other than the creation and execution of incredible music as its objective.

The band's members are all influential within other conglomerations, including their individual work as band leaders, and the sound of them uniting with such precision under one umbrella is never less than thrilling.  And the results are never less than surprising.  The first crazy turn happens a mere thirty seconds into the first track, where the full-scale attack that began the disc slows to a funkier groove, repeating the theme from the beginning and providing a cool surface on which Mitchell's flute and Jason Adasiewicz's vibes solo and dance.

I should point out that a sonic reference throughout the album is the Hutcherson/Dolphy “Out To Lunch” axis, but only texturally.  Melodically and harmonically, Mitchell and Adasiewicz are a very different duo, as exemplified by the wintery chord structure Adasiewicz sets underneath Mitchell's fluttering on “Today Today”.  When Frank Rosaly joins in with cymbal-happy movement during free section of the track, it adds a solar warmth to the icy feel of the vibes and flute.

The centerpiece and title track begins with a four-note descending pattern, followed by a sublime bowed bass solo by Joshua Abrams.  The track appears to be loosely structured on the surface, but is, like everything else here, actually a fairly tight composition.  The interplay here is nothing short of amazing and when Rosaly gets a solo spot that becomes interspersed with unison blasts from the band, it will knock you off your feet.  Incredible stuff.

Abrams and Rosaly are especially adept at the whole swing-but-straight-on thing and “Adaptability” is a perfect example of it.  It's a mid-tempo groove with some delay and reverb (tastefully) added to Mitchell and Adasiewicz.  The knob tweaks are another strange & wonderful surprise – and so is the turn at the end of “Diga Diga,” where the band sounds like a free jazz approximation of Indonesian street music.

The album closes with an elegy to Mitchell's mentor and friend, Mr. Fred Anderson, another Chicago legend.  Words of love are spoken by Mitchell's husband, Calvin Gaant, but the spirit of the music says it all anyway.

On Engraved In The Wind, Mitchell sets sail for her first (to my knowledge) entire album as a soloist.  As expected, her technique is brought to the fore here.  Her control dazzles throughout the recording, and there are plenty of technical marvels to consider.  For example, how on earth does she make that flute play four notes simultaneously on “Making of Rose Quartz”?  There is, of course, a fine example of singing/blowing into the flute on the title track.  And although this is a solo recording, it's not always “live,” as there are a few instances of overdubbing two or more flutes onto a track.

Even though this is something of a recital recording, I prefer to listen to it with my left brain turned down – which is probably the highest praise you can give to a solo recording.  There is so much beauty and warmth here that to focus too much on the execution actually takes something away from the listening process.  Adding more musicians to these compositions would likely have the same effect.

Nicole Mitchell has performed quite a balancing act with these two releases.  On Aquarius, she leads a formidable quartet through music that focuses primarily on her compositions and yet remains open enough to allow the musicians to interpret the music in surprising ways.  On Engraved, she must deliver everything herself.  She does so by contributing material that is so perfectly suited to the task that she makes it seem that her way of executing the material is the only possible option.  As a player and a leader, she's got the goods.  But on both of these discs, as well as on last year's ambitious Arc of O, she shows that it's her compositional skills that are the true center of her art.