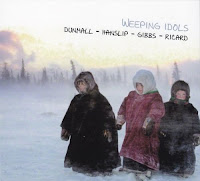 "Weeping Idols", a new CD out on FMR features two tenor saxophones: Dunmall and Mark Hanslip, and two guitars, Philip Gibbs and Ed Ricart(*), what a line up and what great music! I must say I didn't (to my shame) know the two guitarists, but I'll be looking them up after hearing this one. Mark Hanslip has been on our blog on a couple of occasions, look him up to get a better idea of his various projects which range from an excellent drum/sax duo to a larger mainstream project known as the Twelves. Paul Dunmall needs no introduction, I hope!

As for the music on the album, well it's a winner all the way through. For such an oddly grouped quartet of two guitars and two saxes the music is incredibly balanced. There's four tracks of varying lengths, the longest being "4 Souls, 8 Eyes" comes in at 20 minutes, all have a variety of approaches and musical ideas. One of my favourites is the second track "Bhutan" which starts with wonderful guitar arpeggios played by hammering on the frets and treated guitar playing together. There's an ethereal quality to the piece, probably why it's called Bhutan. Whilst the guitars do their thing Mark Hanslip's multi-phonic sounds build up creating a new wave of sound letting Paul Dunmall find another layer higher up in the musical spectrum. If you listen on headphones you really hear the four musicians as four separate voices. It's hard (at times) to comprehend how the musicians made such dense music without standing on each others musical toes!

Another highlight is the wonderful opening tenor sax chase on "Better than Words". Hanslip and Dunmall duet like two greyhounds flying out of the traps. They chase each other around for several minutes before letting the guitars in on the fun, here the pace changes to a more abstract style. The last track "Weeping idols" could be a Beefheart tribute (almost), hard hitting guitars scorching away in atonal freedom for an intense duet, maybe a response to what happened before .... and interestingly a horn free ending to a fine album.

There's much one could say about this record as it's full of delightful playing and surprises. The guitarists have a wonderful complicity, I'd like to know who does what - one works with an almost straight dry sound, whilst the other plays through what I imagine is a delay system (?). Dunmall and Hanslip compliment each other perfectly, both playing in different styles which blend very well. In fact from the sound of "Better than Words" it could even be a starting point for a duet record for two tenors?!

A highly recommended release that will be enjoyed by anyone who likes chamber jazz mixed with free improvisation with real bite. For anyone interested you can try either contacting Mark Hanslip, or via the FMR site.

* = I'm not sure whether Ed's surname name has been misspelt or not, but I've been told that the spelling on the cover is incorrect and should be Ricart not Ricard. However, I've left the album title as it's written as that's what you'll need to look for.

Thanks Andy, I did wonder as the name Ricart came up on Google also. Thanks I'll update the review.