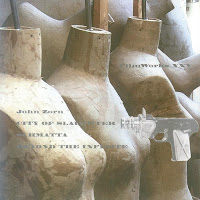 Another of John Zorn’s long time projects are his filmworks, which he officially started in 1992 and allegedly will finish with this album. Zorn has always been interested in the cinematic possibilities of music as you could see on other albums like “The Big Gundown” from 1986, on which he processed the music of Ennio Morricone, or “Godard/Spillane” from 1999, for example. On “Filmworks XXV” Zorn has collected music for three projects, the first one – “City of Slaughter” – being the music for a documentary by Oren Rudavsky (with whom he also worked for “The Treatment” and “Hiding and Seeking”) for the Museum of Jewish History and Tolerance Center in Moscow. It consists of 14 rather short miniatures for solo piano for which Zorn hired the young Israeli jazz pianist Omri Mor (who will also be working on one of the next Book of Angels albums with him). The music itself is typical Zorn merging piano jazz, klezmer and Eastern European folk music. Mor turns out to be a very talented pianist with an interesting, crystal clear style combining Keith-Jarrett-like trills, drowsy Erik Satie chords and the swing of Bill Evans. The music – mostly in minor keys - sways between joyful vitality (“Island/Ghetto”) and a somber foreboding what is going to come (“Anti-Semitism/Pogrom”) and frantic outbreaks (“Pale of Settlements”).

“Schmatta”, the next four tracks, feature Zorn himself on piano, actually presenting ideas he has elaborated in different contexts – motives played by The Dreamers, for example. Of course he is limited as a pianist but it is very interesting to see such work in progress. The music is composed for Marc Levin's “Schmatta” (the Yiddish word for “old rags”), a documentary on the rise and fall of New York’s garment district.

The album closes with “Beyond the Infinite”, a very elaborate mystical piece played by pianist Rob Burger. It is the original version of a track already released by a quartet (Burger on Piano, Kenny Wollesen on vibes, Trevor Dunn on bass and Ben Perovsky on drums) on “Goddess: Music for the Ancient of Days“, which brings the music full circle and back to the first 14 tracks.

All in all these are typical Zorn compositions presented in an unusual context.

Can you recommend the top 3 or 4 in the Filmworks series? I already have III, X, XIII, XIV & XXV.