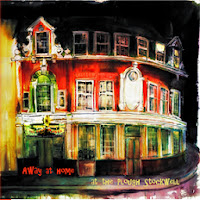 A funk and soul music binge undertaken by John Stevens when he was laid up after surgery was the impetus for the group Away. Though it remains dwarfed next to Stevens’ accomplishments with the Spontaneous Music Ensemble, Away was the drumming giant’s unique way of tapping into the jazz-rock craze of the mid and late 1970s. Away released several albums on the Vertigo label in that time period, and recordings have been sporadically released in the years and decades since, but for the most part, much of the group’s output has been largely unavailable, existing only as assorted notations in the mind-boggling John Stevens discography. Over the past few years, however, Away bassist Nick Stephens has taken to releasing some vintage recordings on his own Loose Torque label, and it’s a wonderful thing. You see, Away was a group that made most fusion bands sound like mere fission.

Away at Home was recorded in 1978 at the Plough Stockwell, a frequent haunt of the band. For this gig, Jon Corbett joined the group, creating a formable funk-jazz sextet of sax, trumpet, drums, bass, and dueling electric guitars. While there’s no question this ensemble was wading into the same waters as Miles Davis, Weather Report, and others across the pond, there’s an energy continually present on Away at Home that seems sorely lacking from a lot of American electric jazz. Away at Home presents an unsubtle, driving music that both embraces the intoxicating headspace of a tightly locked groove and captures the intensity of the classic free jazz free-for-all. Away feared no tempo or crescendo.

Away at Home features four long tracks (and a short fifth piece), most of which are extended mash-ups of tunes from Away’s Vertigo LPs. “Relative Space” makes its mark with an unbearably catchy descending horn line, the track rocketing along until it eventually segues into the  funky, cymbal-driven beat of “What’s That.” The beat is reprised much later at the end of the band’s set, sending the audience through the roof. It’s a perfect encapsulation of what made Away more remarkable than so many of their contemporaries: a small club exuberance that always trumps the bloated, arena-rock detachment that would become fusion’s downfall.

Away at Home is piece of jazz-rock history worth grabbing on to, especially when there’s currently so little from this group to go around. It’s also a side to John Stevens that some of his fans might not be aware of, and a great reminder of what a tireless, passionate force he was in all realms of this music.

Listen to the band here: https://www.youtube.com/watch?v=Kt7osCT7tpk

Nice, I didn't know about this one, what's the line up?

joesh : nip over to www.loosetorque.com for full details -- nice site and some very nice sounds!

Thanks, on my way over there now!