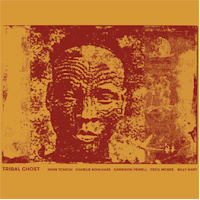 Only at the end of his career John Tchicai, a man who played with Albert Ayler and John Coltrane and who was one of the great voices in free jazz, was allowed to have his first and only weeklong residency at a New York Jazz club, the Birdland. For the concerts Tchicai (ts, b-cl) expanded his trio consisting of Charlie Kohlhase (as, ts, baritone-sax) and Garrison Fewell (g) with Cecil McBee (b) and Billy Hart (dr) because this was the only precondition the Birdland booker had. Tchicai chose these two legends because according to the liner notes he wanted someone who “could play time, could swing and play free”. And what an excellent decision that was!

“Tribal Ghost” is an outstanding album breathing the spirit of jazz history with every tone. You can hear the voices of John Coltrane (of course) and Pharoah Sanders, but also Lee Konitz and Jimmy Giuffre while Garrison Fewell’s sound, which is the secret sensation on this album, reminds of Wes Montgomery, Billy Bauer or even Grant Green. And all these influences are used to create the most beautiful music.

The first track, “Tribal Ghost”, starts with Tchicai, Kohlhase, and particularly Fewell in the focus building up a meditative atmosphere and immediately you can sense this feverish spirituality, this exuberant jubilation, this worshipping of the old masters, this deep rootage in the blues, this magnificent lyricism – something that pervades the whole album, as well as the fact that the tracks are full of surprises: in “Tribal Ghost” the musicians stop all of a sudden, just to reinvent the track as a funk/jazz stomper with Tchicai and McBee holding a hypnotic beat while Kohlhase, who is the actual tribal ghost here, conjures a higher power with Fewell throwing in sharp licks, riffs and thrills.

“The Queen of Ra”, a piece Fewell wrote for Tchicai, also begins in a dark and somber mood with a bowed bass, guitar arpeggios and glockenspiel before Tchicai and Kohlhase break up the atmosphere with a cool jazz theme. The whole piece reminds of a ritual service, especially when McBee leaves his function of maintaining the pulse just to battle with Kohlhase, pushing him to a marvelous solo full of melancholic, angry, expressive and energetic cries.

“Dark Matter”, a piece which was inspired by John Carter’s “Castles of Ghana”, swings almost harmlessly and elegantly but there is also a latent dangerous temptation. It also contains the most beautiful theme on this album.

Yet, the last piece, “Llanto Del Indio” (the only composition by John Tchicai, the others are written by Fewell), is the highlight of the album. After a brief introduction McBee takes on a soulful groove (according to Fewell it was not planned) and the saxes and the guitar seem to dance around each other like children in heavenly joyful ecstasy – innocent and tender, one of these musical moments you want to last forever.

It is all the more tragic that John Tchicai, a man like a tree, died last year recovering from a brain hemorrhage. His last words on this album are: “Have a good life and thanks for spending some time with us. We hope to meet you again sometime in the future.” Unfortunately, not in this world.
The album, which was recorded on February 9th and 10th in 2007, is available as a limited vinyl edition of 1000 copies.

You can listen to a snippet of “Dark Matter” on the label’s website (http://nobusinessrecords.com/) where you can also buy the record. You can also purchase it at instantjazz.com.

One of my favorite albums of the year. I'll write my opinion on it shortly, and fully in agreement with Martin.

Can't wait to pick this one up. Is this a candidate for LP of the year? Although Angles "In Our Midst" LP is around the corner too...