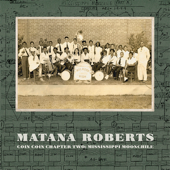 By Martin Schray (with a little help of Colin Green)

Before the release of Coin Coin Chapter One: Gens Des Couleurs Libres in 2011, Matana Roberts announced that it was the first in a conceptual project in twelve-chapters, including notation and free improvisation, historical storytelling, and theatrical elements, with which she would explore family history as well as African-American culture and life during the last 300 years. (The series’ protagonist is Marie Thérèse Metoyer – also known as CoinCoin – a freed slave, doctor, planter and business woman.) It’s a highly ambitious and complex endeavor (some call it big-mouthed) that could have gone terribly wrong – but the result was one of the greatest and most interesting albums of the last ten years.

On Coin Coin Chapter Two: Mississippi Moonchile, Roberts again invokes the great and complex narrative of her Afro-American/Native-American ancestors using the handed down tradition of blues, field songs, even dixieland and gospel, but also free jazz. The music conjures Sun Ra’s creativity and John Coltrane’s spirituality as well as Albert Ayler’s vision and the Art Ensemble of Chicago’s roots in African music (Roberts is an associate AACM member). Instead of the large improvising, roaring, and tumultuous ensemble she had in Chapter One (all in all 15 musicians), she has chosen a smaller band here - Shoko Nagai (piano), Jason Palmer (trumpet), Thomson Kneeland (bass), Tomas Fujiwara (drums) and Jeremiah Abiah (vocals). One finds the same exuberance, disparity, eclecticism and eruptions as before, to which Roberts now adds lyricism and tightness, by way of contrast with the cacophony of other passages. The adoption of the old tunes and laments is enriched by voices (all the band members sing) and tone and tension are enhanced by the inclusion of an opera singer – Jeremiah Abiah – whose tenor is the icing on the cake. In live performances Roberts seems to switch his voice on and off, like interspersed historical comments, in order to portray the complexity of these times. It’s a very visual dimension, yielding emotional images of individual and collective pain, rebellion, desperation, pride and shame. Roberts calls this: “panoramic sound quilting”.

Prominent highlights from the 18 pieces on the album are “Invocation”, the first track, which sounds as if Coltrane has risen from his grave to play a new version of “Alabama”; or “Amma Jerusalem School” and “Was the Sacred Day”, in which Roberts raps like a Creole witch quoting “Joshua Won the Battle of Jericho” and “Sometimes I feel like a Motherless Child”, and children’s prayers in front of a simple, repetitive trumpet riff. When she recites the old gospel: “I sing because I’m happy, I sing because I’m free, his eyes on the sparrow, and I know He watches over me” the apparent ray of hope is immediately followed by a desolate saxophone tune. And there’s “Woman Red Racked”, a call-and-response gospel, in which Roberts’ soulful phrase: “I love you, black woman” gets under your skin. Her approach is angry on the one hand – an agonizing, torn-up, and fragmented evocation of musical ghosts – but there’s also hope and beauty in it.

In the 1990s Wynton Marsalis attacked Lester Bowie, and with him the Art Ensemble of Chicago and AACM. If he were to hear the coherent mix of traditional music and free improvisation on this album, he might want to bite into his instrument.

This just might be the most socially relevant music (not just jazz) being made at the moment. My album of the year.

Coin Coin Chapter Two: Mississippi Moonchile is available on vinyl (including a download) and CD.

Listen to “Amma Jerusalem School” and “For it is” here:

You can buy the album from the label’s website cstrecords.com or instantjazz.com.
Paul on Thursday, October 10, 2013
Share

Roberts is not an active AACM member. just saw a correction for that in the times. she's a past member.

This is a stunning album. Emotionally moving and intellectually engaging. Great writing, playing and arranging. I only hope that Constellation are able to support Roberts with future chapters. This is an important work that needs full fruition.Album of the year contender for me.