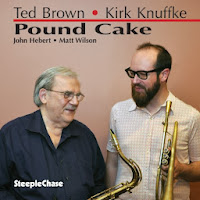 It seems that cornetist Kirk Knuffke, in addition to his many more adventurous projects, has made it his personal mission to document a good deal of the jazz tradition as well, through an ongoing set of recordings with SteepleChase.  (See the reviews on this site of his “tribute” discs with Jesse Stacken: his Mingus record, Orange Was the Color, and his Like a Tree, which includes compositions by Carla Bley, Ornette Coleman, and Misha Mengelberg.  Although unlike those other discs this one includes some originals, some of the standout tracks are the jazz standards, which include Lester Young’s “Pound Cake” and Don Redman’s “Gee Baby Ain’t I Good to You.”  Considered collectively, these albums aren’t destined to become Free Jazz Blog classics, as they’re considerably more mainstream than the majority of recordings we review. Nevertheless, they’re still quite compelling in their own right, as Knuffke manages to infuse them with enough energy and creativity to avoid having them become staid repertory exercises.

It helps that he has such talented bandmates: in this case, his senior partner Ted Brown, a longtime “cool”-styled tenor saxophonist who has recorded with Lennie Tristano, Warne Marsh and Lee Konitz; bassist John Hébert; and drummer Matt Wilson, like Knuffke also a veteran of both outside and inside recording sessions.  Each offers his distinctive voice as an essential part of the collective whole.  Brown has a restrained yet self-assured tone, and his studied explorations of these tunes, including a number of his own originals, are consistently interesting.  Hébert can generate a nice swinging bass line when he needs to, but he’s also able to open things up a bit, using more space in his playing to give the others room to work.  Wilson is right there with him in this regard, as he can provide some punch when it’s called for, but he is typically willing to limit himself to occasional light snare and cymbal accents so as not to overwhelm the proceedings, especially on the quieter tracks.

For his part, Knuffke shows himself to be a virtuosic presence, ranging from impressive flurries of notes (particularly on the title track) to more careful, measured passages that are more subtle and spare.  While his technique is remarkable, he always manages to put it in the service of the music as a whole, and he’s particularly sensitive when joining in with Brown, as the two engage in some thoughtful interaction on a few of the tracks—a great example being “Swivel,” one of the two Knuffke compositions on the record, in which the two horns intertwine nicely during the last third of the tune.

Every now and then it’s good to hear a well-played mainstream record that does justice to the ongoing vitality of the jazz tradition, and this certainly qualifies.  I’m not at all sure how Knuffke manages to find time for all his varied projects, but this is a worthy one.