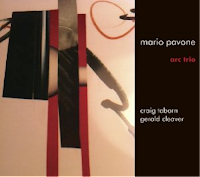 On this terrific piano trio record, veteran bassist Mario Pavone unites with pianist Craig Taborn and drummer Gerald Cleaver for a live outing from Greenwich Village, allowing us to gain a fascinating glimpse into the levels of musical collaboration possible between three masters of their respective instruments.

The album leads off with the powerhouse “Andrew,” with an infectious groove from Pavone developed in sharp rapport with Cleaver.  Pavone has cited Andrew Hill’s Smokestack as an inspiration for the album, and it’s not hard to hear that influence on the opening cut, as Pavone and Cleaver echo the chemistry on Hill’s record between bassists Richard Davis and Eddie Khan and the propulsive drum work of Roy Haynes.  And Taborn is also in top form on this track, with some dazzling two-handed piano runs and, even more fundamentally, an irrepressible rhythmic quality to his playing which only intensifies the groove.  When he locks in with Pavone and Cleaver at the 3:15 mark, generating an array of percussive bursts, the effect is intoxicating.  The only drawback to the track is that we don’t get to hear a proper ending to it, as it fades off on the recording.

The rest of the tracks are similarly superb, albeit somewhat more cerebral and abstract.  “Eyto,” the second cut, is built around a challenging rhythmic figure that eventually settles into another well-defined groove, providing an ideal vehicle for Taborn’s explorations.  Cleaver is the real star of the show on this one, as he manages brilliantly to remain both in the groove and outside it at the same time, offering enough flexibility to allow Pavone and Taborn to range freely as they see fit while still staying in conversation.  “Not Five Kimono,” the longest track, is a slow cooker, building simmering intensity as Taborn uses insistent repeating chords in the left hand while offering a variety of subtle statements on the melody with his right.  And Pavone gets plenty of opportunities to shine throughout the record as well: witness the way in which he uses rapid-fire staccato punctuation to accompany Taborn’s lightning-quick passages on “Box in Orange,” all the while staying in sync with Cleaver’s constant pulse; or the way he shadows Taborn on the sixth track, “Alban Berg,” providing running commentary on Taborn’s ideas that is unfailingly intelligent and creative.

In addition to its many other virtues, it’s a well-recorded album too, as we’ve come to expect from the folks at Playscape.  Indeed, although it’s a live record, the crowd isn’t heavy in the mix, which almost makes it feel like a studio recording at times.  Part of this is due to the precision of the players, who are so attuned to each other’s moves that they must have seemed to be the only people in the room.  But that’s all to the good, as the results are so consistently stimulating and inventive.  All in all, this is a great reminder that the piano trio format, in the right hands, is still one of jazz’s most exciting contexts for creative improvisation.