So far, I think we've reviewed about ten albums by the Brazilian sax player; but New York resident, Ivo Perelman, a musican close to my heart, because of his ferocious lyricism, his raw and sensitive energy, his authenticity as an artist and as a human being. Like with so many musicians, this reviewer would love to write about all his releases, but his output has been so prolific recently, that it's hard to catch up, let alone invest the necessary time for close listening and concentrated reviewing. I can refer readers to the great Discogs website, and you will notice with me that Perelman released no less than a dozen CDs in 2012 and 2013, some of which were reviewed on this blog.


Perelman and Shipp crystalise their long musical collaboration in the most intimate of performances, a duet between piano and sax. Without preparation, both musicians set to the task of co-creating their art of the duet, one of close listening, like-minded thinking and perfect inuition, and of course strong musical skill. This is not a romantic outing, but actually a rather harsh one at times, with abstract phrasing and timing.

And both men co-create from a common background in jazz, with references to known pieces. Is that Jobim in "Duet #8"?, or Ellington in "Duet # 11"? or Gillespie in "Duet #9"? Hard to say because the boundaries of harmony and melody are blurred by higher levels of abstraction, yet they reside unmistakably underneath the chords and phrases, like spirits from the past pushing these two masters forward in their exploration of interaction, of call and response, of cerebral games and emotional alignment and expressivity.

In contrast to some of the other albums reviewed here, the energy is somewhat lower, with both musicians respecting the classical chamber music setting.

"One" is a really ferocious album, with Joe Morris on electric bass and Hungarian drummer Balazs Pandi on drums, a sax trio in the best free jazz tradition, an album that kickstarts as if in the middle of a performance, no intro, no theme, just raw blowing and relentless attacks on strings and skins. The second and third track are somewhat calmer, and more lyrical, with great pulse and implicit rhythm, the kind of foundation which makes it possible for the saxophonist to move in any direction without restrictions.

The title track is a duo between sax and bass, sensitive and wild at the same time, but then the last two tracks the trio is back in full force, relentlessly, with all three musicians moving as one, including the sudden slowing down on the last piece, a strange breathing moment before the storm starts raging again. 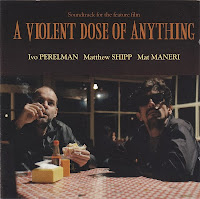 "A Violent Dose Of Anything" is actually the soundtrack for a Brazilian movie with the same title, released earlier this year as "Uma Dose Violenta de Qualquer Coisa", and the music is of an abstraction and dissonance that is hard to make compatible with a movie. Matthew Shipp's piano chords and phrases are among his most unusual, full of openness, lack of pattern or direction, a strange backdrop for both sax and viola to play with strange undercurrents of surprise and disorientation.

But then if you read the plot summary of the movie "Pedro has taken the road and he does not know where he is going. Lucas does not know it either", the music makes sense. Next to the wonder and disorientation, there is drama, but also some fun moments, when a sudden rhythmic pattern makes the three musicians join in a little dance, that disappears as quickly as it arises.

Interestingly enough, the strange, floating quality of the music is maintained throughout the album, making it a very coherent, and special listening experience.


"The Edge" is offered to us by a quartet with Perelman on sax, Matthew Shipp on piano, Michael Bisio on bass and Whit Dickey on drums. The album starts with arco bass and a romantic sentiment coming out of Shipp's piano, forcing Perelman to move in an almost David S Ware style into the stratosphere, full of expansive howling to the universe, full of power and confidence, in sipiritual awe.

On the second track, they're back on earth, starting with some 60s jazz feelings, but rapidly evolving into soaring sax and intense rhythm section, into the essence of real free jazz, but Perelman is not a screamer, quite to the contrary, despite his ferocious energy, his tone remains warm, and throughout his soloing he comes with melodic phrases or rhythmic emphasis, playing with volume and speed, offering lots of variety and beauty on top of the intensity.

And the album has variations in line-up too. Two tracks are actually duets between sax and drums, one of sax and piano. These three tracks are also the calmest ones, and near the album ends in full force, in the aptly titled "Volcanic", and the last track is an ode to Ben Webster, called "Websterisms", with again a 60s sentiment, but a 21st century delivery.

This is Perelman at his best, and I must say, all four musicians are fantastic on this album.


For a quartet that features two drummers, the album starts quietly, with a ballad called "Enigma" on which Perelman and Matthew Shipp share sensitive thoughts, fragile and slow, with a minimal percussion support, a few cymbals, some toms, nothing substantial.

"Irresistible Incarnation" starts with some dramatic piano chords, with bluesy right hand runs, but Perelman joins almost against the intro, with rapid phrases breaking the sentiment, supported by the energetic propulsion of the bass drum, slowly growing in power until both drummers are active, with counter-rhythms and antagonistic interations, playing the same thing, yet full of cross-currents and whirlpools, with changing emphasis, volume and intensity.

"Annunciation" is only full energy, a solid work-out for the quartet, with Shipp resorting to some of his most percussive playing too, hammering on his keyboard, supporting a screeching and howling Perelman, and sentiments change again with "Supernatural Life", a slower piece, yet with relative energetic drumming, two-timing the piano and sax. Then Shipp and Perelman play two duets, the first one slowly, the second one with somewhat chopped and unpredictable rhythms and evolution, as if some madness forces the two artists to jump and turn for no apparent reason.

The album ends with the powerful "A Bourgeois Ideal", not without reason placed at the end of the album, and a great finale for a strong album.


But in truth, "Serendipity" is the greatest album of them all. Just one track, a fourty-three minute free jazz blow-fest, expansive, exuberant, relentless, with references to bop somehow, with references to Coltrane in spirit, but Perelman, Shipp, Paker & Cleaver in reality, with the four virtuosi giving the best they can give, driving, propulsing the music forward, full of intensity and unavoidable necessity of notes and rhythms that are what they should be, hammering and pounding and uplifting and tearing and moving, without pretence, without cerebral intervention of chords or phrases that think about harmonies or structure, or clever creativity, no, a wild outburst of pure heartfelt musical energy, expressing things that we all would like to express but lack the means to, making this even more valuable, the thing we would express if we had the same skills as these four guys, so that makes it good to hear, a quartet in unison with the listener's emotions and deeper aspirations, releasing unexpressed feelings and even shady things hiding between feelings and thoughts. In a way, this is the band that goes beyond self-consciousness, that stops thinking, but fully falls back on some more foundational, some rawer and authentic expessivity, in a denial of the cerebral, lifting the music to a level of absolute purity and energy.