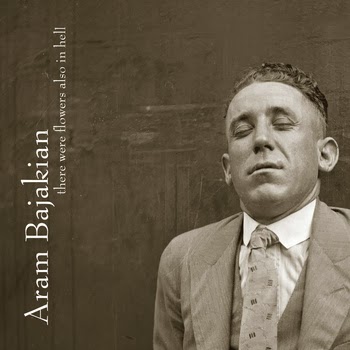 Use Aram Bajakian's there were flowers also in hell to kick off your next party. Put on 'Texas Cannonball' and watch as your guests begin to dance. A little later in the tune they may be tempted to get stoned, but they'll soon be dancing again, albeit perhaps just a little slower. In fact, your guests won't even notice the seque into the next track. The gorgeous 'Loutone' picks up on the previous song's theme and then proceeds to deconstruct it into a buzzing, shimmering, and ultimately blazing tribute to Lou Reed.

Each listen to there were flowers also in hell reveals new layers and ideas. Track three, 'Requiem for 5 Pointz', the controversial industrial building featuring a graffiti exhibit that was whitewashed over by the owners in their effort to turn it over to developers late last year, is an evocative solo guitar piece in the vein of Anders Nilsson's Night Guitar or Marc Ribot's Silent Movies. This reflective piece is followed up by the feisty Eastern-tinged 'Orbisonian'. The laid back ballad 'Sweet Blue Eyes' is just bursting with melody, and somehow, in some non-sensical, completely unwarranted way, keeps suggesting to me certain moments from 'Don't Let Me Down'. 'Rent Party' may be the most infectious song of all - a dark groove, blues-like changes, and a serious dose of sludgy post-rock all in the span of 5 minutes. To think, I'm only half way through this album!

there were flowers also in hell is a strong musical statement by Bajakian, an inventive guitarists who has worked with Diana Krall and Lou Reed, and is member of the powerful group Abraxas. The band on this record includes bassist Shahzad Ismaily from Ceramic Dog and drummer Jerome Jennings.

Bajakian describes it a blues album on his website. That's a nice an open term for the music - it's downtown New York, it's blues, it's rock, it's guitar, it's free-jazz, and it's quite enjoyable.

Give the album teaser a try: