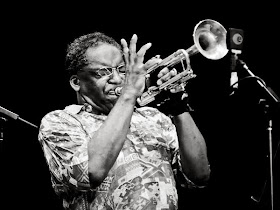 May Roy Campbell rest in peace. Such sad news. I am not familiar with the circumstances of his passing away, so I cannot talk about this. I can only talk about his music. and he's one of those musicians whose art resonated very deeply with me, and his music and his playing have been a kind of mental door-opener or ear-opener to me for real free music. He was without a doubt one of my favorite musicians.

I am listening to "Other Dimensions In Music" now,  released on Silkheart in 1989, and one of my favorite albums, with Daniel Carter, William Parker and Rachid Bakr, a quartet that performs open-ended improvisations, soulful, beautiful, spritiual, and so free. Nothing is composed, but these four artists know and feel each other so well, that the end result has this incredible coherence and esthetic. None of these guys plays for himself, the music comes first, and the soul that drives it.

Campbell did not release that many albums under his own name, having played primarily in many bands by now famous artists, starting with Jemeel Moondoc, or as part of William Parker's Little Huey Creative Music Orchestra", as part of "The Nu Band" with Joe Fonda, Mark Whitecage and Lou Grassi, or with Louie Belogenis, Hilliard Greene and Michael Wimberley as "Exuberance", he even played in the Peter Brötzmann Tentet, an unlikely match if there ever was one, or in the horn section of Yo La Tengo, with Daniel Carter and Sabir Mateen.

His performance with Matthew Shipp, especially on the wonderful "Pastoral Composure" or on "Strata", his albums with Ehran Elisha, or his collaboration with Spring Heel Jack. I loved his collaboration with that other great warm trumpeter, Dennis Gonzalez, on his "Nile River Suite", a collaboration which probably made him release his own "Akhnaten Suite", an album that I hold in high esteem, in contrast to some other critics.

Campbell was a very soulful player, probably one of the real musical heirs of Don Cherry, very lyrical and playful in his expressivity, open to other cultural influences, never violent or harsh, which makes it surprising that he sometimes played with musicians who fall under that category, especially thinking of the "Europeans" here, a very spiritual player, someone who could lift the spirits of band-mates and listeners alike.

For those interested, here is my list of Roy Campbell albums, and my appreciation of them (and the list is evidently not complete: I do not have all his albums, unfortunately). I did not include all the William Parker collaborations, nor the Vision Festival CDs, which would have taken this too far. But just look at the number of four and five stars in this list. True, this is not all because of Campbell, but for sure his contribution played a significant part in the overall sound of the albums.


In the meantime, I am listening to "The Gift - Live At Sangha", a trio performance with William Hooker on drums and Jason Kao Hwang on violin. This is one of those albums that I've listened to several times with my eyes closed for the entire album, with headphones on, and just to be fully part of what is happening. The album has only one track, an endless improvisation of these three instruments, who woo each other, rejoice, moan, weep and sing, while at the same time being full of character and gentleness, but full of a deep authenticity, playing blues and jazz and middle-eastern sounds, without any false sentiments or pretence, so real, so real.

I don't know the person Roy Campbell well. I met him several times when he performed in Belgium, or at the Vision Festival, and talked to him, after the concert, once even sat the bar with him to chat about his music. He seemed to be a very friendly and open person, accessible and interested.

I am listening to "The Gift" now, to his great trumpet playing, and think about what he has offered us, what gifts he has given us all when you see the list above. I am sad, and my thoughts, and probably all our thoughts are with his family and friends. We will miss him.