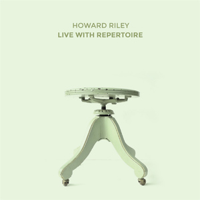 On the one hand NoBusiness is a label that features younger or less known artists like YAPP and Steven Lugerner but also established ones like Kidd Jordan, John Tchicai, Joëlle Léandre or Howard Riley, with whom they produced the fantastic double album “Solo in Vilnius”. Riley is one of the great European first generation free jazz pianists like Fred VanHove, Misha Mengelberg, Keith Tippett or Alexander von Schlippenbach. With the latter he shares his love for Thelonious Monk and classic jazz tunes in general. In 1993 he has released “Beyond Category”, a CD with standards by Duke Ellington and Monk, and there is also the double CD “The Monk and Ellington Sessions”.

Riley’s music has often been called reserved and constructivist, maybe because of  his classical avant-garde background. However, his approach is by no means unemotional, there is a very beautiful lyricism in his style.

On “Live with Repertoire” you can see this if you compare his version of “Round Midnight” with the one by Miles Davis, whose interpretation of the classic Monk tune sounds like a soundtrack to a French film noir in which the protagonist strolls through a deserted Paris, or with the one by Stan Getz, who seems to illustrate a Douglas Sirk melodrama, while Riley’s “Round Midnight” takes place in a functional modern city, full of glazed buildings, in which people are completely estranged from each other. His style is crystal clear, but the few angular notes hint that not everything is perfect in this clean and ultramodern world. Under the surface there is a dark utopia created in this track. But there is another possibility to interpret the way he plays this track – and this has to do with Riley’s personal situation.

During a recording session, he realized that he couldn't play anymore and went to see a doctor, who diagnosed Parkinson's disease. He had to stop playing for some time, and luckily he has recovered with the help of medication. However, he had to revise his technique. “Live with Repertoire” is what he calls his “first post-Parkinson's record, though that's not exactly a great selling point!” Maybe more than any of his latest albums this one shows Riley's personality and individuality. It is this new Riley that becomes audible in tunes like “Round Midnight”, but also in the slight disharmonies and rhythmic bumps in “Body and Soul”, “I’m getting sentimental over you” or “Darn That Dream” - the songs appear in a different light in front of this background.  Riley seems to face his destiny in a similar way as Keith Jarrett has done it – by playing the music of his youth, the standards – he displays his roots.

So, if you are a Riley beginner you might rather pick his trio album "Flight" (FMR) or "Synopsis" (Emanem), both with Barry Guy and Tony Oxley, or the above mentioned “Solo in Vilnius” - but “Live with Repertoire” is absolutely another true gem in his catalogue.

“Live with Repertoire” is available on CD, you can buy it from instantjazz.com.

Listen to “Darn that Dream” here: