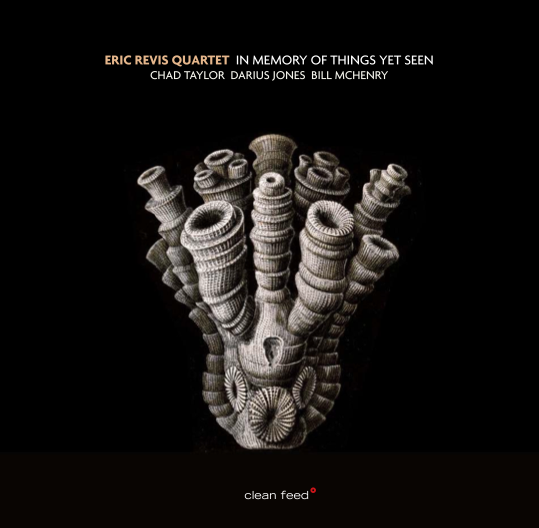 This a very different sounding album from it’s predecessor City of Asylum.  Whereas City of Asylum contained more of a complex but colourful atonal texture, In Memory… is much more modal and linear with a clear forward direction.  The line-up this time is also a very significant part of the difference, as it is a piano-less quartet of alto saxophone, tenor saxophone, bass and drums/percussion.

The emphasis is much more on compositional thought than straight ahead improvisation, and the pieces have been well put together using solid compositional devices.  It is a lean and economical album, as one would expect from good compositional writing, with nothing extra added for the sake of it.  The pieces work well individually and as a collection with excellent playing giving them, at times, a simplistic and easy natured feel.  It is this point that gives the album its real strength, and as you would expect from the musicians that Revis has worked with in the past and continues to work with in the present the playing is excellent and effortless.

The music is interestingly syncopated at times and the melodies have great shape and character with the use of hocketing techniques & staggered entries creating extra rhythmic and textural interest in contrast with more straightforward unison lines.

The album starts with ‘The Tulpa Chronicles I’ with it’s beautiful sounding vibes creating a soft and gentle introduction to the album before launching into ‘Hits’, which is only one of two completely improvised pieces on the album.  This creates a good contrast to the start of the album and this interest is extended with ‘Son Seal’ with it’s rhythmically interesting melodic writing being engineered by the clever use of time signature changes flicking between a straight beat and a swung pattern with subtle changes in tempo.  This piece in particular just seems to get better with every listen.  These three pieces really set the scene for the rest of the album, which continues just as strong in both ideas and playing throughout, whilst ‘The Tulpa Chronicles III’ conjures up the notion of a modern take on a medieval square dance with it’s arco ground bass pattern and accented rhythmic percussion.

Overall there is a clear sense of structure to the album without it ever becoming derivative.  The written sections are interesting, and the improvised playing is strong.  There is great interplay amongst the instrumentation within the writing, which exudes the quality that is clearly on offer here.