It's not often you connect free jazz albums through amphibians... (and there are more salamanders in recent jazz – the first track on Alexander von Schlippenbach's "Vesuvius" (2005), the third track on Vinny Golia's "9 Pieces for solo Bb clarinet", the tenth track on Aych's "As The Crow Flies" (2012) ... so much for irrelevant information)

Danish guitarist Pierre Dørge is a real jazz veteran, with his roots in the sixties, and with his ears stretching around the world, incorporating African, Middle Eastern and Asian influences in his band's repertoire over the decades. His music is adventurous in a way, but within the boundaries of accessibility to traditional jazz audiences, with written and arranged music that goes beyond the genres, and is great fun actually. His Danish Jungle Orchestra has animal artwork as its signature : elephants, giraffes, crocodiles and camels.

Now the exuberance of his band is gone, the power of the jungle's giant animals forgotten for a moment, because Pierre Dørge meets the new generation, and on their turf, bassist Torben Westergaard and drummer Tyshawn Sorey, who also plays some piano on the album, for a more intimate setting, the smaller world of salamanders, less exotic, but also not entirely domesticated either. And that's how the music sounds.

The result of this interaction is nothing short of mesmerising. Dørge seems to enjoy the freedom, the openness, the space that is created by the Westergaard and Sorey, who are both masters of precision, of sonic accuracy, doing what is needed to create a sound environment, but nothing more, no pyrotechnics, no decoration, no ornaments, just careful and sparse use of emphasis and pulse and mood.

Dørge is jazzy, and bluesy, quiet when needed, and not afraid to go berserk too, and even if it's not his intention, what a lesson he gives here to the younger generation of guitarists, and then on their turf, with wild ideas and sonic explorations. Listen how his guitar howls like a trumpet on "Ethnic (Uphill) Climb" (or is it something else?) over the funky restrained hypnotic beat that Westergaard and Sorey lay down. And as on his other albums, the ethnic influences appear here too, as on the Chinese sounding piano ballad that Sorey improvises.


What a gorgeous album, played by musicians who have nothing to prove, are not playing to create great art, but just to have a go at it, and use their incredible skills to offer us great music, coherent, captivating, and incredibly enjoyable. An album you will listen to a lot (at least I did, and still do). 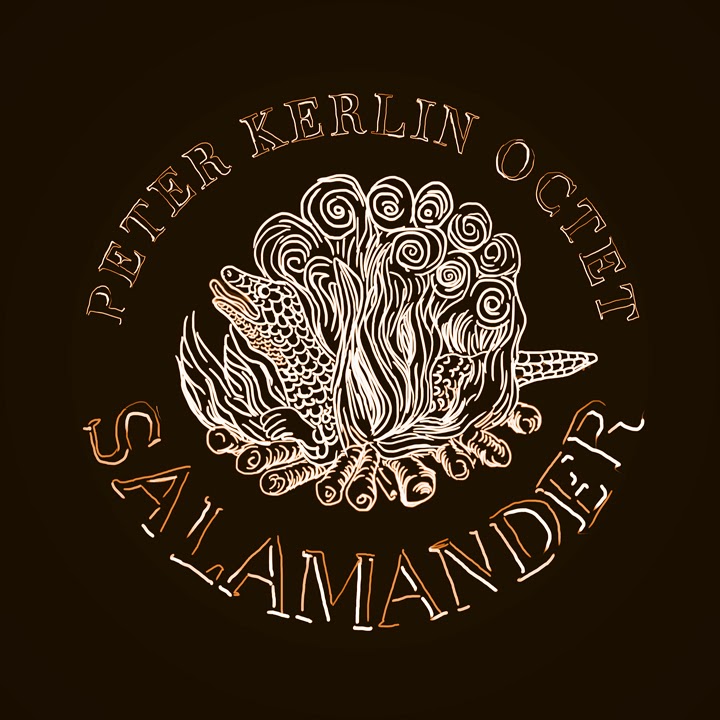 Peter Kerlin is a bassist (I know it's guitar week, but I'm going on the Salamander theme here) and composer and his music with an octet on Salamander is a mix of epic post-rock compositions and improvisation.

The bass lines are riveting - like actual rivets holding together the songs - groove driven but not funky - just rock solid. The songs move like giant blocks of melody through an assembly line designed by MC Escher. It is the insistent bass lines that keep the pieces moving along.

The tracks 'Cenozoan Warp' has an ethereal atmosphere generated by the marimba and percussion, until the bass comes in with a repetitive and uplifting melody. Violin and guitar add texture and muscle as the song builds layers upon layers. The track 'Wanna Let the Bell Tower Ring' starts out more intensely and then fractures into odd shapes and lovely passages.

The unusually bass heavy octet is comprised of Peter Kerlin, Taylor Bergren-Chrisman and Brent Cordero on bass, Sam Sowyrda and Cesare Papetti on vibraphone, Amy Cimini, Jessica Pavone and Karen Waltuch on viola, Emily Manzo on organ and Wurlitzer, and Mike Pride and Charles Burst on drums and percussion.

I've been poking at this recording for a while now and each time I put it on, I'm reminded of how good the combination of instruments and how unusual the approach to the composition is, and think why isn't this on my play list more frequently? I have no good answer except that it's quite rich and so absorbing that I must enjoy just nibbling at it.