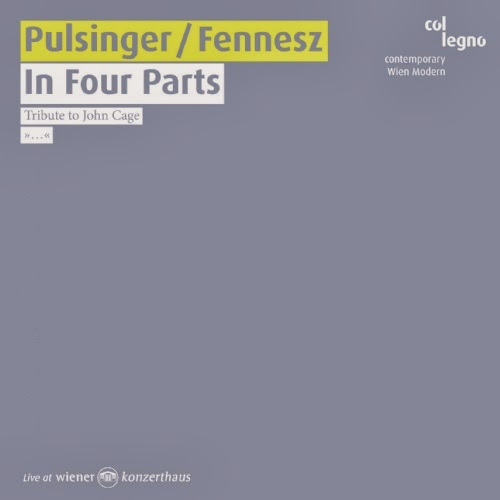 John Cage’s 1950 String Quartet in Four Parts is a quiet, folksy composition that’s stippled with moments of dissonant uncertainty—though the piece was wholly composed, its unpredictable turns point towards the aleatoric music of the future and the dalliances with chance and silence that would become Cage’s legacy. The “gamut” technique Cage used was designed to stifle any normal harmonic progression, resulting in a calm, very melodic piece of music that also behaves in ways that are difficult to anticipate. It would be one of his last “fully” composed pieces of music. Soon after, he would largely hand the reigns over to chance.

More than half a century later, In Four Parts was recorded live at the 2012 WIEN MODERN festival. Cage’s string quartet was reimagined for a duo of electronics: Patrick Pulsinger’s modular synth took on the roles of viola and cello, and the violins became Christian Fennesz’s guitar and electronics. I should clarify that In Four Parts is better described as “inspired” by Cage’s composition (the album’s subtitle is “A Tribute to John Cage”)—it really sounds nothing like Cage’s piece or even a string quartet. However, there’s a stunning depth of sound and cool, meditative air that’s certainly in keeping with Cage’s concerns. It’s easy to imagine being present at the live performance, experiencing total immersion in the alien swells of sound, which at times feel as divorced from human intention as any of Cage’s wilder aleatoric experiments.

What In Four Parts retains best is the gentle beauty of the original—even through its unanticipated curves, there’s something profoundly relaxing and ruminative about the performance. The second part begins with a bit of a pulse, a feeling of movement that’s at odds with the flat, static nature of the original composition, but eventually the piece moves into a strange state of suspension, a haze of modular synthesizer that’s punctuated by Fennesz’s electronics like awakening fireflies in the dusk.
Much of the dissonant tension and contingency in Cage’s composition arose from the use of gamuts: before he began composing, he developed a set of chords, each one associated with a specific note. When he then wrote the melodies for the quartet, each note was coupled with its previously assigned chord, resulting in a disjointed harmony that was completely unrelated to the melody, could not have been foreseen ahead of time, and created a slightly jarring, uncanny listening experience. Limited to two players, Fennesz and Pulsinger revive these dissonant patches not through recreating unusual chords, but by using the incredible flexibility of their electronic instruments to create changes in timbre, unexpected splashes of color against the lulling, resonant current that runs beneath much of the performance.

In Four Parts is surely a loose adaptation, but it’s an impressive performance nonetheless, in keeping with Fennesz’s experimental works with groups like Polwechsel or Pulsinger’s previous Col Legno release, the wonderful Besides Feldman.  The liner notes contain a quote by Cage, stretched out to just a few words per page: “to sober and quiet the mind, thus rendering it susceptible to divine influence.” There’s no telling what you might channel while listening to In Four Parts, but its expansive atmosphere can’t be seen as anything but an open invitation.