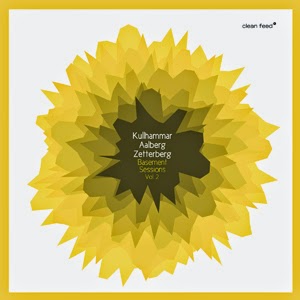 Jonas Kullhammar's Basement Sessions: Volume 2 is an excellent album, confident and powerful, influenced by and adding to the great tradition of hard bop sax/bass/drum trios like Sonny Rollins, Joe Henderson, Ornette Coleman, and Dexter Gordon.  This album is a tribute to a trio led by Elvin Jones, who, with Joe Farrell and Jimmy Garrison, released two albums on Blue Note -- Puttin' it Together, and Ultimate.
The trio of Jonas Kullhammar, Espen Aalberg and Torbjorn Zetterberg were clearly drawing from these sessions as inspiration for the Basement Sessions.  Drummer Aalberg, composer of most of the compositions, evokes the spirit of those Blue Note sessions in track like Gluck, One for Joe, Elvin's Birthday Song and Moserobie Blues, with Kullhammar punching and parrying playfully thoughout, and Zetterberg laying the solid rhythms to provide the glue between the two.  Yet while upholding this tradition, they are cognizant of the contemporary music scene, and tracks like Moksha and Triton, they become more contemplative and abstract without being too obtuse.

Kullhammar has had, throughout his career,  one foot in traditional hard bop and the other in contemporary improvisational music, and his efforts to combine both and make meaningful, urgent jazz in the 21st century make for compelling listening.  With the combined efforts of Aalberg and Zetterberg, Kullhammar has put out one of his best efforts in years.