A Deep Listening Weekend
We haven't had a weekend in a while where two reviewers give their opinions on an album back to back on a weekend. We're happy to present it this Saturday and Sunday with Made to Break's Cherchez La Femme... 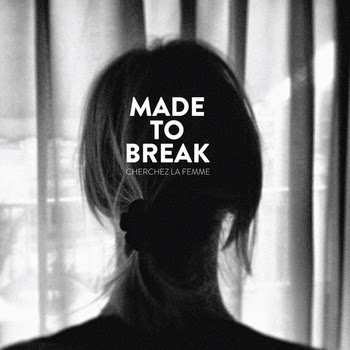 Very often the tracks in improvised music are named after they were written or improvised, so sometimes a certain kind of philosophy is imposed on the music after the actual creation. Made to Break have used philosophical backgrounds on their albums “Lacerba” (futurism) and “Provoke” (a dedication to influential geniuses of the 20th century) and now they are combining dedication and philosophy again. What is new is the fact that it seems that the music is philosophy set to music – and not the other way round.

The French phrase “Cherchez la femme” is often mistakenly thought to refer to a man’s attempt to “look for a woman”, which is what it means in English. In fact, the phrase expresses the idea that the source of any given problem involving a man is liable to be a woman (especially if there was a crime). But Made to Break - again Ken Vandermark on saxes, Christof Kurzmann on electronics, Devin Hoff on bass and Tim Daisy on drums - use this phrase to trace women’s influence on contemporary art, especially music, painting and photography.

Sans Serif starts with a heavy funk rock riff by Daisy, Hoff and Vandermark, as if The Minutemen met James Chance. All of a sudden it is replaced by a meditative part for which Hoff’s monstrous vibrating bass chords are resolved by Kurzmann's electronic psychedelia. He creates a world of textures and repetitive samples, the track gets some air before the third part steps back to the beginning’s funkiness and it is again Hoff’s thumping bass which keeps the whole thing going. Sans Serif is obviously a musical reminiscence of Miles Davis’s fusion era (for which he was inspired by his wife Betty Davis) and Sleater Kinney’s feminist grunge iconoclasm.

Capital Black is dedicated to two abstract expressionist painters: Helen Frankenthaler and Joan Mitchell. Daisy and Vandermark start with a few brushstrokes creating fine lines on the musical canvas, especially Daisy’s drums sound like an upright bass - before Hoff creeps in almost unnoticed. It is a tender and delicate interaction, even balladesque … and then the music almost disappears. It is Kurzmann who throws in mean dubs, the atmosphere gets very gloomy – as if the color black hasn’t been used before so that they can now use it extensively.

The Other Lottery starts with helicopter noises as if we were in a jungle war zone. Susan Meiselas, who is one of the two photographers this composition is dedicated to (the other one is Helen Levitt), took pictures in Guatemala and Indonesia (among others). Compared to the other two pieces Made to Break present a highly fragmented track here, it is like a world torn apart. Only at the end Devin Hoff takes over the steering wheel and brings the band back on track again: dirty, plain, sweaty, down-to-earth funk rock - like Levitt’s and Meiselas’s street photography.

Booka (who's review posts tomorrow) said he cannot stop listening to this album – so do I.

“Cherchez La Femme” is available on vinyl (without The Other Lottery), CD and as a digital download.

You can download and listen to “Cherchez La Femme” here.