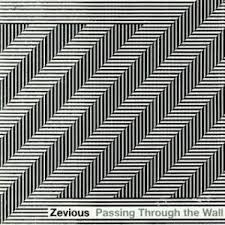 The cover art gives it away: This record is not going to be “fun” in any generic sense of the word. The austere black-and.white pattern turns the old proverb warning you not to judge a book by its cover on its head; While by merely looking at the artwork you won’t be able to guess what genre or style the new Zevious record falls in, you’ll nevertheless get a pretty good idea of the music‘s general characteristics. As a matter of fact, Passing through the Wall is every bit as austere, rigorous and intellectual as the packaging suggests.

Just in case you got the wrong idea and are now expecting experimental techno of the Raster-Noton variety: Zevious are actually an instrumental rock trio from Philadelphia. The band, which includes members of like-minded instrumental heavyweights Dysrhythmia and Many Arms, started out as an acoustic jazz unit, but has grown louder and more aggressive over the years, and Passing through the Wall sees the trio fully committing to a math-rock aesthetic. Considering their somewhat noodly beginnings, it’s actually a bit of a surprise how comfortable the band is in its new suit. Apparently, bassist Johnny DeBlase and brothers Mike (g) and Jeff Eber (dr) have spent a long time absorbing and dissecting seminal works by bands such as Bastro, Shellac and Bitch Magnet – bands that, in stark contrast to the current crop of math-rockers, achieved density not by cramming a million riffs into each song, but rather by subtracting everything that doesn’t support the progression of the song.

But while Zevious certainly share this ethos of reduction with the above-mentioned bands, there’s something about the trio that sets them apart. In a way, they’re not just applying the lessons learned from early math-rock; they’re pushing the rules of that subgenre to their breaking point. Those older bands were eager to do away with tired rock conventions, but they often maintained a narrative quality in their songs. Zevious, however, use reduction and repetition in such a way that very little remains of a linear development. As a result, the music on Passing through the Wall is austere and inaccessible to the extreme. At first glance, it seems to be almost completely devoid of sensuality, dominated as it is by repetitive, syncopated rhythms that only very rarely settle into something like a groove. Mike Eber’s guitar doesn’t offer much in the way of a relief either, as his contributions consist mostly of dissonant, emaciated chords and short, nimble-fingered Jazz solos.

Listeners accustomed to more conventional rock sounds will most likely dismiss this record as annoying (but their wording will most likely be less polite). But it’ll be their loss. Attentive listening reveals that there are a lot of interesting ideas to be found underneath the seemingly monotonous grind: Consider, for instance, how drums and guitars in the lethargic Crime of Separate Action slowly intensify and finally shake themselves loose from the tight, Shellac-by-way-of-Meshuggah anti-groove. Or consider how Entanglement marries an almost punkish forward thrust to the cataclysmic dissonance of Dimension Hätröss-era Voivod. And finally, consider how the band needs only a few notes to enact a wordless drama of Slint-ish proportions in Plying the Cold Trade. In a way, this album is remarkably close to the idea Walter Benjamin had of philosophy: Benjamin once said that, in order to attain the concrete, one had to traverse “the ice-desert of abstraction.“ Zevious, too, lead the listener through an ice-desert, and while that’s not a particularly appealing environment, what it does to the wanderer is remarkable. In other words, you won’t find a luxuriant orchard here, but you’ll attain a clarity of perception that in turn will allow you to find something of interest in even the most barren landscape.

Passing through the Wall is an album that doesn’t impose itself on the listener; As such, its greatest strength is probably that it is at odds with pop culture at large, with its tendency to overwhelm. Sometimes, being annoying is a virtue.

A very nice and well-written review. The fact that Slint's masterpiece "Spiderland" is just being released in a remastered version might be interesting in this context as well. Music in the tradition of Shellac, Slint, Bastro etc. can't be wrong. I will definitely give this album a try.

Thanks Martin! I can return the compliment, as I enjoy reading your reviews as well (Btw, Cassiber have recently become a new favorite of mine, thanks for that!).