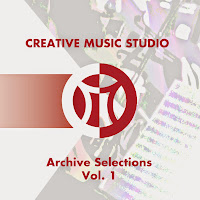 The Creative Music Studio was founded in the early 1970's by Ornette Coleman, Karl Berger, and Ingrid Sersto in Woodstock, NY. They wanted to create an environment where musicians from all backgrounds, all over the world, could come and learn, collaborate, and explore. This three disc set, (one of many I hope) is a selection of music culled from over several hundreds of hours of recordings, focusing here from 1977 to 1981.

The first disc: Small Groups, features four untitled duets by Charles Brackeen and Ed Blackwell. Both are in top form, playful and exuberant, moving from post hardbop into free improv. Reminds me of a duets version of the Elvin Jones trio of the late 60's, but freer. David Izenen's group has the next three tracks, all different. Frederic Rzewski and Ursula Oppens play a composition by Karl Berger, 7inC, piano duets, classical inspired yet improvised. Leroy Jenkins and James Emery put forth an outstanding pair of tracks, Ashiata and Okidanoh, the latter track being more hard edged with a jamming violin and guitar duet.

The second disc: Orchestral, are three large ensemble groups, and where one may be let down by the sound quality (it sounds like it was recorded in the back of the room), the performances are excellent. Olu Dara leads off with the CMS Orchestra on three untitled tracks, a rousing blues track, followed by a very free improv with bop elements tune, finally a very funky, possibly Miles Davis On the Corner era influenced tune. Oliver Lake has 4 tracks, all rhythmic, powerful and challenging music that combines the sound of the World Saxophone Quartet with larger orchestral backing, to excellent effect.

The third disc: World Music, again features three groups that show the international influences on improvised music. Ismet Siral leads off with three tracks, Turkish improvised tunes that have strong emphasis on the flute, very rhythmic and engaging. Nana Vasconcelos follows with two tracks, showcasing a Brazilian improvisation, with Call and Response and Berimbau Solo, both emphasizing voice chants and the berimbau. The final group is Foday Suso & the Mandingo Griot Society, with Adam Rudolph, Hamdi Drake, and John Marsh, with three gorgeous tracks of West African kora and jazz.

The Creative Music Studio Archive Selections: Volume 1 is a magnificent start to hopefully a long series that reveal the creativity and diversity of musicians who came together to collaborate and redefine music. It should be reemphasized that while the sound quality overall is very good, these mostly live performances are sometimes rough and far away sounding. This should not detract from one hearing this excellent music. Highly recommended.