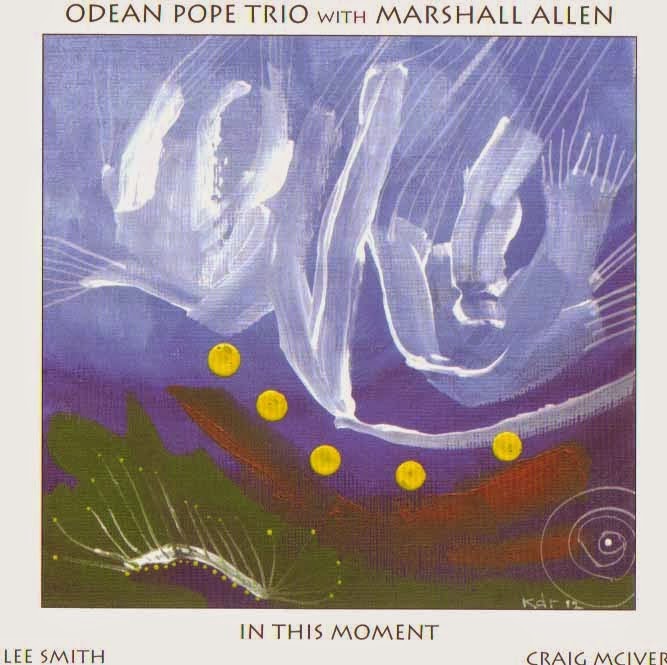 "In this Moment" is a late 2013 album on CIMP (Creative Improvised Music Projects), with Odean Pope and his trio, with legendary Arkestra member and leader Marshall Allen.  Pope's albums on CIMP have featured many pairings with modern sax players, such as Luther Thomas and Prince Lasha, so this album can be seen as a continuation of this theme.  While both are in their autumn of their years, both still have the creative fire and chops to play at the top of their form, as the opening track "Maze (take 1)" starts off with a bang, drummer Craig McIver opening with a salvo of beats for both Pope and Allen to ride on, as both trade off their distinctive sounds, Pope being firm but stead, and Allen more acidic and edgy, pushing each other forward.  "Maze (Take 2)", is a longer and even more furious version, Pope employing his Coltrane influenced sheets of sound playing, with Allen responding with succinct responses.

If only the entire album maintained this intensity.  Instead, we have a series of solo and duo efforts, which, taken individually, are quite beautiful.  "On this Day" we hear just Pope and Allen, beautifully executing a bebop like phrasing that evolves towards something more free.  "Circumstance" is a fine moment featuring Odean mostly soloing, drawing from his Philadelphian music heritage to create an intimate yet deliberate and playful moment.  "City Streets" and "Collage Four" can almost be heard as one long track, again McIver providing an aggressive foundation for the horn players to swing and improvise.  Yet a feeling over the entire album was that it felt too polite, too respectful or maybe restrained.  The soloing was good but felt too overly familiar, and many times seemed to drift off to a tangent, which, as a listener, made one forget how the track began and started to lose interest.  Perhaps a bit more competitiveness was in order, like a Johnny Griffin/Eddie Lockjaw Davis vibe, or a better editing of track selections.  Fourty minutes would have been real tight, but with an hour it loses cohesiveness.  Nevertheless, this was a welcome collaboration that hopefully will lead to more, as Pope and Allen work remarkably well together.