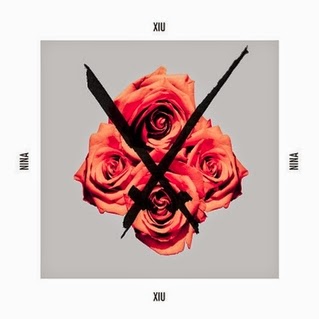 Xiu Xiu is a California group formed and led by Jamie Stewart. The band's music is experimental, incorporating rock, jazz, and punk elements. The album title Nina refers to the great singer Nina Simone, and the album is a tribute to as well as an interpretation of her music. Released in late 2013, it features an outstanding group of musicians - Tim Berne, Mary Halvorson, Tony Malaby, Ches Smith and Andrea Parkins.

While the song titles might be familiar to those who know Simone's music, here Xiu Xiu brings a very different approach. "You'd Be So Nice" opens the album with the free blowing brass of Tim Berne and Tony Malaby and the crushing drumwork by Smith, with Stewart's vocals barely a presence until halfway through the track. Not exactly the intimate standard that the song is known for.

The music ranges widely, sometimes like a Bertolt Brecht cabaret, as in "Where Can I Go" or "Don't Smoke in Bed". Stewart brings his voice to a hoarse whisper, creating a real sinister and creepy mood. Is he singing to entertain you or to possess you? He has an unusual voice -- evoking Simone's contralto voice and intimacy, but without the acidity. Think of Sterling Holloway (as Kaa the snake from the Disney animated film the "Jungle Book") singing in a Tom Waits or Scott Walker manner. "Pirate Jenny" starts from the same aesthetic but the interplay is more dynamic, his voice teaming with guitar, then guitar and drums, to electronics, to horns, to all.

One might ask how does this relate to Nina Simone, but it could be seen as deconstructive reinterpretations. There are many straightforward instances of Stewart being true to her spirit. He nails it on the excellent "The Other Woman," featuring Mary Halvorson's marvelous guitar playing (the duets with Stewart and Halvorson are highlights on the album), and "See Line Woman," a righteous track that everyone rocking, providing an infectious beat and a Led Zeppelin like ("Gallows Pole") feel. "Four Women" has Smith propelling the song forward with rolling thunder of drums, and the others moving along like a wave, gloriously aggressive, and Stewart riding on top.

Overall, Nina is an unusual but rewarding take on a classic American singer's oeuvre.