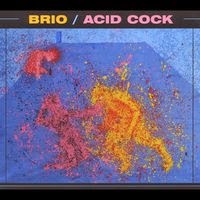 There is no such thing as an “improvised and free music” scene in Croatia. And yet, the duo Brio, consisting of brothers Gordan (guitar) and Neven (drums) Krajačić, has enjoyed quite a long career while also managing to garner some international recognition. Dealing almost exclusively with free improvisation in the past, their new album “Acid Cock” finds them at their most accessible yet. Instead of relying solely on noise and free jazz elements, the Krajačić brothers turn to a somewhat minimalist blend of various styles as a way of expressing their eclecticism.

In the process of moving from an acoustic, mellower, and rather inaccessible approach towards a more electric and extroverted sound, Brio have also become angrier. Indeed, gone is the carefully laid out philosophical rethinking of the world, gone is the use of silence as a building block for their music. Instead, aggression and noise prevail. This is especially obvious on the first two songs on “Acid Cock” which are both brooding and intense. “JFK’s Last Speech” and “It Must Be Painful When It Slides In” show a band that is pissed off and frustrated, enraged with the world, tired of everyday nuisances. That anger and bitterness pour through these songs, permeating their every sound. The repetitive and droning drums, the hopelessness expressed through a menacing-sounding acoustic guitar, the haunting backdrop provided by sparse sparks of an electric guitar, and the spoken word passages make you feel queasy and disconcerted while listening to the first song. It’s a tune that’s not merely postmodern in its atmosphere, it’s post apocalyptic! The second song marks a change in pace. It’s more energetic, akin to the music of Weasel Walter, with blazing tremolos, screeching, abrasive, and distorted layers of guitars, and twitchy, hectic drumming. This is the track that will be most appealing to lovers of improvised, dynamic music. You could say that the beginning of the album presents what is, stylistically, radical and free improvised music that owes a lot to raw punk and rock, moreso with regards to atmosphere and attitude than sound.

The first two tracks deserve to be singled out because they are the highlights of the album. On them, the band sounds comfortable in their own skins, the music is embellished with negativity but the songwriting does not suffer because of it. Unfortunately, it’s downhill from there. With the exception of the fifth song, “Descension”, which borrows from modern creative jazz (think Mary Halvorson), all the compositions which make up the middle section of the record are easily forgettable and unremarkable bluesy rock tunes with repetitive, corny, almost cheery themes that are in stark contrast with the previously displayed attitude and track titles. It almost sounds like the band is capitulating and waving a white flag. The album closes with “Yellow”, which sounds like a continuation of the first tune. We are left wondering which circle or story is “Yellow” closing exactly? The idea and general purpose of the album remain unclear. The impression of stylistic eclecticism without deeper meaning leaves a bad taste.

Brio have created a solid, but uneven record. They present themselves as chameleons playing with a carousel of styles, but instead end up resembling a “various artists” compilation. This is still an album worth listening. There are numerous exciting and very enjoyable moments that can be found scattered throughout the seven songs, but several shortcomings hold it back from being a stellar record. Brio’s got the talent, so I wish they would just leave the accessible and “easy listening” music to someone less talented. They can do much better... as I’m sure they will in the future.