In the last few years especially the Austrian label Cien Fuegos has re-released a lot of Peter Brötzmann’s recordings of the late 1960s up to the early 1980s. Lots of these albums were out of print for a long time and are now available as well. Also, the American Eremite label is a great resource for old and new Brötzmann stuff. Here are three essential examples. 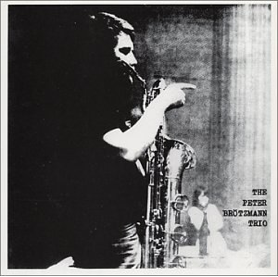 This is Peter Brötzmann's debut recording from 1967.  It was reissued a little over a decade ago on Atavistic as part of a series called Unheard Music that also added a bonus track from a different session.  It's been available on vinyl twice before: on its initial small run on Brötzmann's own Brö label, and again as one of FMP's first releases.  This is the first time For Adolphe Sax has been available on vinyl in over 40 years!  That's not the only reason to celebrate though, as Cien Fuegos has done an incredible job remastering this work of major historical significance.  The sound on this record completely blew me away, especially when compared to the Atavistic CD.

Back in 1967, the classic Brötzmann sound was still a work-in-progress.  It sounds surprisingly thin compared to the full-throated bleating growl we know today.  In short, it lacks the richness it was to acquire in just a year or two.  The trio itself was also short-lived.  Peter Kowald (bass) and Sven-Ake Johansson (drums) would soon leave Brötzmann, to be replaced by the more celebrated trio featuring Fred Van Hove (piano) and Han Bennink (drums).

The title track takes up all of the A-side and features, primarily, Brötzmann squealing over the sure-footed million-man stomping of the two-man rhythm section.  In theory, this sounds fantastic; but reality shows that Brötzmann needed a counterpoint here.  Pharoah had Coltrane; Arthur Doyle had Frank Lowe – and Coltrane and Lowe were the leaders.  Pharoah broadened his style by the time he made his first solo recordings; but Doyle's solo efforts desperately cry out for balance.  That's the problem Brötzmann has on For Adolphe Sax.  Having said this, the record also lacks the full-on ecstatic assault of Alabama Feeling – or Machine Gun - although at the time of its release this may have been the most insanely fiery record on the planet.  This record is simply not much more than a promising beginning to the great man's career; and in this respect, it's a bit like the first couple of Ornette Coleman records: interesting, promising, full of great ideas – but not yet hitting the mark.  However, if you have more than a passing interest in Mr. Brötzmann this disc is essential – and here's why: Back in the late sixties, most outward-bound jazz recordings were still anchored by themes, a head, something somewhat melodic – even Cecil's work!  This record has none of that; and this is its declaration of intent.  European Free Improvisation starts here.

The remaining two tracks are slightly more subdued, with Johansson playing with mallets and Brotzmann leading the changes on the slower “Sanity,” and a squawking war between Brötzmann and Kowald on “Morning Glory,” which also features Brötzmann doing an Ornette-plays-the-braying-mule imitation perfectly.

Three stars for the music – and an extra half-star for the sound mastering. 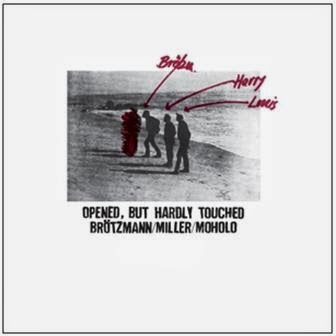 In the mid-1970s Peter Brötzmann was the leader of his legendary trio with Fred Van Howe and Han Bennink (before this one he had the one with Peter Kowald and Sven-Åke Johansson on the aforementioned “For Adolphe Sax”). It was a sheer miracle that this trio lasted for five years and recorded eight albums, since there was constant friction especially between Van Hove and Bennink (Brötzmann calls it “a fight between three heavyweights”). At last, they decided to go separate ways.

After the split Brötzmann formed another trio with the South African musicians Harry Miller on bass and Louis Moholo on drums. Brötzmann said in an interview: “I was glad just to be there with a new trio, which was a kind of relief anyway. There was not so much to say, it was just about playing. Louis gave me a completely different idea about my own playing. Harry was the good soul of the trio – he was a good soul no matter who he was playing with. So that was very good for me, otherwise I would have fallen into a deep void.”*

Together they released two albums, “The Nearer the Bone, the Sweeter the Meat” (1979 on FMP, re-released by Cien Fuegos in 2012) and “Opened, But Hardly Touched” (1981 on FMP), and after being in a constant group for such a long time the new trio was a real relief for Brötzmann, in the end it opened up another world for him.

And you can hear this world on “Opened, But Hardly Touched”. While the music of the old trio rather focused on an iconoclastic approach including clownesque elements and German folk songs, Brötzmann comes back to his influences here, especially the blues. On the first track “Eine kleine Nachtmarie” (a malapropism of Mozart’s “Eine kleine Nachtmusik”) his clarinet soloing is still torn between these worlds since Harry Miller’s rolling bass tries to win him over for this new way. It seems that Brötzmann tries to defend his old position, however, on the next track “Trotzdem und dennoch” (“In Spite Of and However”) Moholo purports the rules and Brötzmann (now on tenor) cannot resist the slow swinging pulse the rhythm group provides. Yet, Brötzmann has not completely changed here, his notorious blowing stamina is still in him. “Special Request for Malibu” is an angry, intense and furious attack in which he blows his lungs out, for example, on the other hand the band suddenly falls into quiet and reflective moments.

Moholo and Miller are his anchor, never denying their South African background but they combine it with a lot of western influences. Moholo sometimes even mumbles, groans and shouts in the background  – as if it was an anticipation to what Brötzmann was going to do  soon with Ronald Shannon Jackson and Last Exit.

“Opened, But Hardly Touched” is the missing link between his old trios, his rock excursions in the 1980s, his sax drum duos and Die Like A Dog. Like “For Adolphe Sax” it is a must-have (which was hard to get for about 20 years). Thank you, Cien Fuegos!

* The interview passages are taken from the recently published “Brötzmann: We Thought We Could Change Something – Conversations with Gerard Rouy”; Wolke Verlag Hofheim.
The interviews are in English, for fans it is absolutely recommended.

“Opened, but hardly touched” is available as a limited double vinyl edition.

You can buy it from the label’s distributor: http://www.trost.at/ 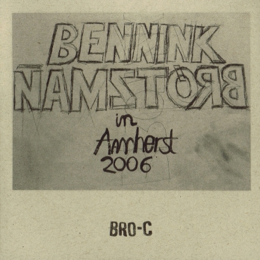 Several years ago, I stumbled onto a Brötzmann & Bennink clip on youtube that so astonishingly good I snagged it and put it on my iPod for repeated viewings.  That video was taped at the performance documented on this disc, which was released as a tour CD in 2008.  I'm not sure if it is being reissued, but its initial release is still listed on the Eremite website.

The disc opens with Bennink playing his drumsticks against the floor (and maybe the walls) while Brötzmann blows the taragoto.  It's a mere two minutes before Bennink is banging his kit with rapid fire asskickery, to which Brötzmann responds in kind.  For my money, nobody provides the kind of magic carpet on which Brötzmann loves to fly quite like Han.  This is followed by jaw-droppingly amazing interplay between the masters on “I Am His Brother”, with Brötzmann now on clarinet.  The conversation turns quickly into antagonism on the next track, on which Brötzmann tries to take to the skies over and over while Bennink chases after him, pulls him down, and kicks him after each attempt until they both collapse on the ground with laughter.  Then Han plays piano on “I Am Everyman”, eventually coaxing Brötzmann to go Lester Young around the 8.5 minute mark!

Further highlights:  Brötzmann quotes Monk's “Pannonica” on “This Is My Faith”.  “My Deepest Hope and My Only Relief” opens with a beautifully spastic (or is it spastically beautiful?) Bennink solo before cutting loose into more astonishing “playing as one” interplay.  The beginning of “My Strength”, which is the unreal Youtube clip I saw way back when, morphs into a Prime Time groove with just the duo of Ornette and Denardo.

These guys have played together for decades and are almost always “in the zone” when they play together, but this document is particularly outstanding.  The titles here seem to be the consecutive lines of a poem.  Forgive me if I don't recognize it.  One more thing:  How was this ever conceived of as a limited release?  And worse, how did it not sell out yet?!?  This thing is amazing from start to finish.  Essential.

Dear readers, I'm an idiot. I discovered Noah Howard's "The Black Ark" and Frank Lowe's "Black Beings" almost simulataneously; and although they're completely different, I always confuse them - even when grabbing one of these cds to play (which is fairly often)! Very unfortunately, I made the same error when writing this (obviously not very well self-edited) review of Brotzmann's first album. Arthur Doyle was Noah Howard's counterpoint man - NOT Frank Lowe's sidekick! My apologies to everyone exposed to my shoddy work and clogged mind. Both "Black Beings" and "The Black Ark" are essential recordings and should be owned by everyone with even a passing interest in free jazz and this blog. I just hope you don't emulate my stupid ass and confuse them for all to see. Again, sorry for any head-scratching or aggravation I have caused anyone.