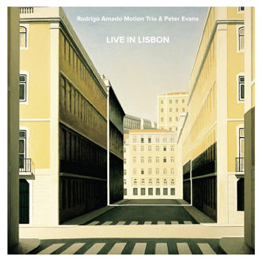 Stefan Wood has already praised Portuguese tenor saxophonist Rodrigo Amado and every word he wrote is true. The Freedom Principle is a marvelous album, but it is not the only one Amado has released on the fabulous Lithuanian NoBusiness label: Live in Lisbon, the one we will talk about today, is actually the first of the two releases, it was recorded live on 16th of March, in 2013, while The Freedom Principle is a studio recording from two days later.

Live in Lisbon consists of two tracks - “Conflict is Intimacy” and “Music is the Music Language” – and especially the first title functions as a guiding idea the musicians seemed to have for this album. Obviously, Rodrigo Amado (saxes), Peter Evans (tp), Miguel Mira (c) and Gabriel Ferrandini (dr) carry out conflicts, since they are free individuals bringing in different ideas. They are on stage to make a statement, but they respect each other, there is an open-mindedness which is necessary to create something new. In order to achieve this, the musicians have to be intimate, they have to trust each other.

Gabriel Ferrandini’s and Miguel Mira’s contribution cannot be overrated here. Ferrandini’s drumming is a mixture of Paal Nilssen-Love’s wild outbursts and Tim Daisy’s use of additional material, which creates both a certain texture and independent solo contributions (like a moderator who is taking part in a discussion). The same could be said about Mira, who swings to and fro between a pulse generator and a self-confident participant fueling the conflict. This is what makes this music so great: the absence of traditional rhythm which is just there to support the soloists, instead there is a spiritual wholeness of a real group. Nevertheless, Amado and Evans are prominent and pull out all the stops in this musical debate. They use their musical language (grammar) to create new music (content) - so the second title is kind of programmatic as well. Their communication can be hot headed, reasonable, emotional, convincing and self-reflexive at the same time.

The result is self-determined music of an outstanding quality, it is a dynamic, unifying force that is not only beautiful to listen to, but also expands the listener’s awareness of what it means to be human and really alive, it is an uplifting experience. The quartet plays in a context which is a natural evolution of Ornette Coleman’s legendary quartet, each member contributing his whole individuality freely and spontaneously while at the same time,  considering the aesthetic needs of the composition. There are a lot of magic moments in these 38 minutes (for example the beginning of “Music is the Music Language” or the last eight minutes in general, or the tender communication in the middle of “Conflict is Intimacy”).

This recording is a unified, harmonic whole, a spiritual unity (Ayler’s influence on Amado is clearly audible) which is finally what this music is about. It is about real freedom and real democracy in this world, it wouldn’t work if it was fake.

Live in Lisbon is limited to 300 vinyl copies only.

Both Live in Lisbon and The Freedom Principle are available from Instantjazz.