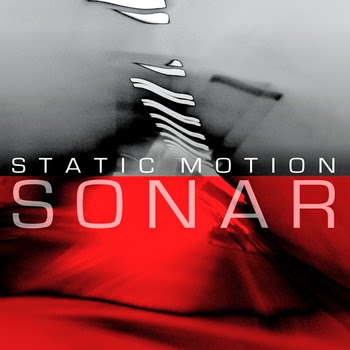 Maybe I’m reading too much into this, but there seems to be a resurgence of Minimalist ideas going on in rock music right now. 2013 saw the release of (at least) two albums that managed to apply the basic rules of Minimalism in appealing ways to an avant-rock template: For Appalachian Excitation, the “freak-folk” troupe Megafaun teamed up with legendary composer Arnold Dreyblatt; and only a few months later, Zevious released Passing through the Wall (reviewed on these pages not too long ago). If you object now that it takes at least three bands to constitute a “movement”, well, this is where the Swiss band Sonar comes into play. Published in February, their new album Static Motion is indeed the third record in hardly more than six months that brings to life the Minimalist principle – ceaseless repetition and subtle variation – by means of more or less conventional rock-band instrumentation. Beyond that, however, the Swiss group doesn’t share too much common ground with its peers. Given Minimalism’s emphasis on self-restraint and its supposed narrowness, it’s actually quite surprising how different the three groups sound: In terms of mood, Megafaun’s joyful excitement couldn’t possibly be much farther removed from Zevious’s thorny, noise rock-derived dissonance; and Sonar, for their part, represent a “third way” that’s equidistant from both of them.

What sets the Swiss four-piece – Stephan Thelen and Bernhard Wagner (g.), Christian Kuntner (b.), Manuel Pasquinelli (dr.) – apart is the comparative calm exuded by their music; for the most part, Static Motion eschews the propulsive-ness favored by the other groups mentioned. This, of course, is inseparable from the philosophy underlying the whole album: As its title suggests, Static Motion sees the band wrestling with an old dilemma, a dilemma that revolves around the difficulty to represent stasis by musical means. The first track, then – which also happens to be the title track –, can be viewed as a statement of intent. All the key elements of the band’s sound are present here – the unusual tuning of the two guitars (and the bass, as well) and the extensive use of complex (poly-)rhythms –, and they are combined in such a way as to give the impression of something that moves but doesn’t make any progress.

Paradoxically, it’s the ceaseless activity of what I assume to be micro-intervals that accounts for a sense of stasis here, whereas the slower-moving melody that eventually creeps into the song is at first perceived as an actual forward motion. Once they run parallel to each other, however, the “giant steps” of said melody – which references Mahavishnu’s Meeting of the Spirits – seem to be not moving forward at all; all of a sudden, this melody is more akin to the image of a mountain as mirrored in a lake, seemingly solid and yet constantly blurred and obscured by ripples in the water. It’s an intriguing reversal that brings the band’s philosophy to life.

Moreover, it illustrates the main strength of this record: its evocative power. Far from being a merely mathematical exercise in rhythm and repetition, Static Motion manages time and again to envelop the listener in a vivid atmosphere. Consider, for instance, how the dubby bass and chiming guitars in the aptly titled “Shadowplay” convey the feel of a late-night car ride, where the constant change of light and shadow lulls you into a dream-like state, and the potentially lethal velocity is seemingly softened to calm hovering. Or listen to how the guitar in “Continuum” seems to tell tales of bygone times, recalling Takoma Records-fingerpickers like John Fahey. Still, not everything on this largely strong record works. While “Vertical Time” is an apt track to end this album – what else but silence could follow on twelve minutes of near-stasis? –, it doesn’t really manage to grab the listener’s attention. With that complaint out of the way, it only remains for me to add that this Minimalist resurgence may continue as far as I’m concerned – if future contributions are as strong as Sonar’s, that is.