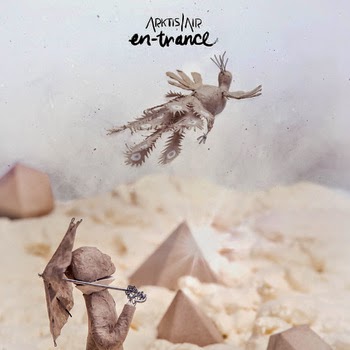 It might seem a bit odd to complain about this, but the frequent comparisons of Vienna-based sextet Arktis/Air to John Zorn’s jazz-core are – while they may help to increase the band’s profile – perhaps also a bit of a disservice to the up-and-coming jazz/rock unit. While not exactly a red herring, the Zorn comparison sells short the variety of Arktis/Air’s approach and might give readers the impression that they’re little more than copycats.

Like most really good bands, though, the Viennese sextet – which sports an unusual line-up of one alto saxophonist, two electric guitarists, two keyboarders and a drummer – draws on a rather wide range of influences that, in this case, gives the lie to such potential accusations of mere Zorn-worship. Guitarist and chief composer Robert Pockfuss, who contributes four out of the seven tracks here, brings a strong prog- and jazz-rock inclination to the proceedings; with the exception of the martial thumping of opener Airuin – a truly ominous track, with the saxophone howling like an air-raid siren and elements of drone/noise music creeping in towards the end –, all of his tracks seem to pay homage to classic prog bands. Hotbed’s labyrinthine rhythms and keyboard-heavy grooves are strongly reminiscent of both the Soft Machine and underappreciated Italian jazz-rockers Area, until sax player Philipp Harnisch gets to showcase taste and technique in an angular solo that is – yes, I admit it – kind of Zorn-like. In Poskok, then, Pockfuss lets the band worship In the Court of King Fripp, with a pungent sax theme and punchy guitar riffs that sound like they’re straight out of an early Crimson album. Finally, the intricately intersecting lines of album highlight Filter clearly draw on Univers Zero’s chamber-rock.

Still, this isn’t retro-prog, as all of Pockfuss’ tracks are endowed with an angular aggressiveness that’s more akin to contemporary, non-fusion-y jazz-rock hybrids like Zu. And beyond that, the band has yet another side: The three remaining, collectively penned tracks hint at free jazz (Makeup) as well as at a modern (Scandinavian) strain of improvised music. Luv, in particular, deserves extra mention here: it is equal parts idyllic, Talk Talk-like post-rock and torrential, Supersilent-esque post-jazz improv, equal parts peaceful glide and stormy passion – a truly apt ode to the feeling its title alludes to. Considering the band’s youth, and the taste, talent and variety on display here, I’m tempted to say that only the sky’s the limit for Arktis/Air – actually, the main reason I’m withholding half a star here is that I’m sure they’ll produce even better records in the future.