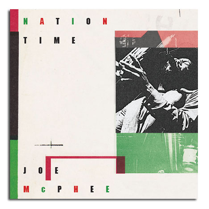 In yesterday’s review of Joe McPhee’s four albums he recorded for CjR, I already remarked that I consider ”Nation Time“ a landmark recording. From the very first moment you have no chance to escape: “What time is it?” shouts Joe McPhee at the beginning of the title track. He is at the top of his voice (actually even beyond), and the audience responds enthusiastically: “Nation Time!” (a reminiscence of a Amiri Baraka poem). Plain and simple call and response! And it was time for the black US community to show a new self-consciousness.

The music reflects this new attitude: sweaty, greasy funk riffs, attacked by free post-Coltrane sax cries, Fender Rhodes chords, heavily overblown parts close to sheer ecstasy pay tribute to McPhee’s great idols of that time: Albert Ayler and James Brown. McPhee puts the phrase “Move your ass and your mind will follow” into practice, his band plays pure dance floor stuff - this is great fun, charged with a political message. And he had a great band with Mike Kull (p, Fender Rhodes), Tyrone Crabb (b), Bruce Thompson (tp), Ernest Bostic (dr) and Otis Greene (as),  Herbie Lehman (org) and Dave Jones (g) on the best track of the album, “Shakey Jake”. The raw energy of this piece, for example in the guitar solo, is like a soundtrack for the social reality in the urban ghettos of the late 1960s and early 70s. It’s black power at his best, although the other two tracks were live recordings while this one was recorded in a studio.

It was a shame that this album was hard to get for such a long time which makes this release all the more important. Around the original re-mastered album this release contains twelve tracks of the “Nation Time” sessions, which were previously unreleased, and “Black Magic Man”, another McPhee album which was hard to get (originally released on the Swiss Hat Hut label in 1975) and which is here available on CD for the very first time.

From a musical point of view the live recordings at The Paddock, a local bar, are the most insightful ones, even if the sound quality is not the best – but you can hear how the audience reacts to this hot brew. The band plays an early – actually half-baked - version of “Nation Time” here, but you can already feel the raw power of the track, since it rather concentrates on bass and drums giving the rhythm section a lot of solo activity. And the addictive sax riff is already there. The other Paddock track is untitled and also gives us an idea of the forthcoming direction of McPhee’s band – soul jazz with a thick organ groove, the music which became fashionable in the 1980s and 90s under the label “acid jazz”, only that Mc Phee played a rougher version of it. The tracks recorded at Vassar College, which are on the same CD, show a completely different Joe McPhee: the one on trumpet who is deeply influenced by Miles Davis and who plays standards like “Milestones”, “My Funny Valentine” and “Bag’s Groove”. “My Funny Valentine” has become a track that has accompanied McPhee throughout his career and it is particularly interesting to compare this version with his recordings with Trio X (there on sax), where he deconstructs the tune and where he literally lays open the skeleton of it, while he plays it rather traditionally here. If this album was released separately I would probably only recommend it for McPhee experts but on the other hand it gives great insight into the development of his musical concept during McPhee’s Poughkeepsie years.

A real treat are “The Vassar Sessions, 1970”, six unreleased live tracks which present the whole musical cosmos of McPhee’s in these days and a notion where the journey would go after “Nation Time”. As an echo of the free funk days you can find his version of James Brown’s “Cold Sweat”, and if Brown’s original is already raw and tough, McPhee strips the track to the bone - again with the “Nation Time” line-up, who act like a free jazz band playing funk (and not the other way round).  Then there is a ballad like McCoy Tyner’s “Contemplation”, shaken by bumpy rhythms and powerful piano chords, which display a spirituality McPhee has elaborated during his career, or a Miles Davis Quintet tribute like “Spring Street”. Both tracks hint that McPhee might want to go more in the jazz direction. Completely out of the blue a track like “Hymn of the Dragon Kings” pops up – wild, pure free jazz, brutally puzzling, almost inaccessible and hard to listen to on the surface, but actually a highlight of the whole set, adding one instrument after the other to an unheard cacophony before the whole improvisation goes down in a piano trio swing thing – but then again this is also an indispensable element of McPhee’s musical world. It is a track which was originally released on “Black Magic Man”. “Sunshowers” intensifies the impression that he is back in the free jazz field since it sounds like an FMP track of these days, but then the album closes with a very mellow untitled track dominated by a Latin atmosphere, which might be a bow for his Bahamian background.

Another result of these sessions was “Black Magic Man”, an album that – according to McPhee - “wasn’t even supposed to be on a label”. But Werner X. Uehlinger, a Swiss man working for Sondells Pharmaceuticals, which had offices in New Jersey, asked McPhee if he could put it out. Uehlinger was so impressed by McPhee’s music that he decided to found HatHut to publish his music (although McPhee denies that) – and his first release was “Black Magic Man”. Although this is completely different music than “Nation Time” because McPhee wanted to add some freer elements, the band is the same: Mike Kull (p), Tyrone Crabb (b), Bruce Thompson (perc) and Ernest Bostic (dr). The album starts with the title track, and before Kull and Crabb join in McPhee and Bostic fight a real battle, they keep attacking each other, and then the whole track goes totally mad – best classical free jazz at the height of its time. But the central piece is “Song for Lauren”, a hymn-like, highly spiritual composition somewhere between Coltrane, Sanders and Ayler – and one of McPhee’s most heartfelt ones. The album presents two shorter alternative takes, with Kull on Fender Rhodes instead of the piano and without the free jazz part of the version of the original album. The result is that the spiritual effect is much less in the foreground and the piece is less abstract and chaotic but also less gripping. The final track is the already mentioned “Hymn of the Dragon Kings”.

“Nation Time – The Complete Recordings” is luxuriously packaged, with a booklet containing an extensive conversation between John Corbett and Joe McPhee and many previously unpublished (and wonderful) photographs, which provide the historical context of the recording.