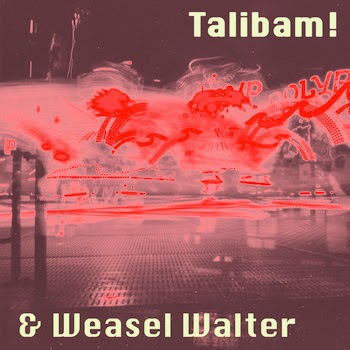 Listening to Polyp, one could get the impression that the musicians involved are making fun of music. The record abounds with moments of deliberate silliness: goofy voices, short, nonsensical skits and even a piece that could be taken from a TV commercial advertising some nutty religious sect – complete with electronic drums, cheap, muzak-like keyboards and spooky voices intoning “mystery” – are sprinkled throughout the album. This penchant for absurdist humor will delight some and annoy many others, but it won’t come as a big surprise for those who are already familiar with the trio of musicians responsible for Polyp. Talibam, the duo of keyboarder/synth player Matt Mottel and drummer Kevin Shea (also of jazz pranksters Mostly Other People Do the Killing), have never adhered to the rules and standards of official “good taste”, often finding the sublime in the ridiculous. Likewise, Weasel Walter – who adds bass clarinet, guitar and extra percussion here – is certainly not averse to humor himself, as evidenced throughout his career by – among other things – his bizarre glam-rock troupe Vanilla. But apart from the humor, these three gentlemen share a love for a particularly fierce brand of free improvisation, and that’s what Polyp, too, delivers.

It’s actually not a completely new recording; originally released in 2009 on Cd-r only – under the title Keep Your Laws Off My Body! – it has been remixed and re-sequenced for a 2014 release on Belgian laabel Mnóad. That, however, does not diminish its worth; on the contrary, this re-release is quite meritorious considering the intensity of the music. From the get-go, the trio puts the pedal to the metal, opening the album with Quebranto, a track that sounds a bit like an improvisatory take on the faux-dilettantism of everyone’s favorite rock deconstructionists, US Maple. Shilajit, then, which accounts for almost a quarter of the album’s forty minute running time, is clearly a high point here; on top of Shea’s (almost) one-of-a-kind drumming – he lets the drum sticks land as greedily on the skins as a swarm of locusts on a corn field – the band works itself up into a frenzy, with the clarinet-blowing and the 8-bit-twitter of the electronics trying to keep up with the percussion. It’s a strain of improv whose most obvious historical precedents are probably Captain Beefheart’s Hair Pie instrumentals. Another track that’s worth singling out would be Ska vi knulla: Once again, Shea’s scattershot drumming is the highlight here; about midway through, it starts to sound like hail falling on a gigantic vibraphone.

Now this is the point where most readers probably expect me to say that Polyp could’ve been an outstanding improv record – if it weren’t for the silliness. But that’s not going to happen, not only because it’s already good the way it is, but because – more importantly – the humor is probably inseparable from the trio’s way of music-making. Perhaps not unlike Beefheart or Zappa at their respective best, they don’t use humor simply for cheap laffs – they employ it to position themselves differently vis-à-vis their music. So yes, they are making fun of music in a way, but they’re doing it in a quasi-satirical manner, that is in order to gain a new perspective on music, in order to be able to look at it – and at the prescriptions of good taste – from a distance. Consequently, Polyp has a boundless energy that surpasses many of the more poker-faced improv records – the energy of someone who’s literally rolling on the floor laughing and throwing himself about in fits. And, as you might know, that can be infectious.