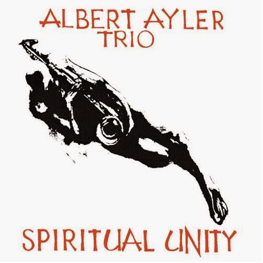 There is no doubt that Ayler’s combatants are a match made in heaven, but there is more to “Spiritual Unity” which makes the album so outstanding. The recording of the music is simply brilliant, although this happened accidentally. The music was recorded in a cheap studio in just a few hours and the sound engineer was so uninterested that he forgot to record the session in stereo (although ESP label owner Bernard Stollman requested it). Yet, all the three instruments are extraordinarily well-balanced, the three musicians obviously enjoyed the great atmosphere, and the result is that the mono sound is – even today - unusually tense and fresh. Ted Joans said that that it was so different, so rare and raw, like screaming the word “fuck” in Saint Patrick’s Cathedral on an Easter Sunday service.

But above all it is Ayler’s tenor that makes the difference. On the one hand it is rich, full and intense, he had developed his style which was literally based on overtones (instead of using them here and there). Furthermore, hardly anybody had such a vibrato, there is an enormous sadness in his tone. And after all he might be the most revolutionary of all the saxophonists of these days albeit he is deeply rooted in spirituals, funeral marches and the blues. Structurally it is his saxophone that keeps the compositions together since Ayler has always been a great melodist, all the compositions have a hook line to which he returns. If you listen to the opening of the album, “Ghost (Variation 1)”, the calypso-like melody jumps into your face and you are almost tempted to sing along before the track goes astray just to find his way back to the beginning. Also, “Vibrations”, the extra track ESP has put on this version of the album, is a perfect example of the trio’s way to handle a tune which is why the track makes a great extension to the only 28 minutes of the original. “Vibrations” is the performance briefly and accidentally substituted for "Spirits" on an early vinyl edition. It is the same tune known as “Vibrations” on the album of that title on Arista/Freedom respectively “Ghosts” on the Debut version of the album and as “[tune Q]2” on the Revenant box set “Holy Ghost”.

“Spiritual Unity” was ESP's first jazz recording and the beginning of the label's identity as a home for jazz avant-garde and improvised music. It's the album that made both him and ESP famous – or, to quote my friend Jochen: “Spiritual Unity is an essential recording and should be in every jazz collection. It is worth every price.” Word up!

ESP have released the five-track-version of the album but also have they just repressed the standard vinyl edition of Spiritual Unity (without the fifth track), but if you purchase it via espdisk.com, it comes with a free download including the bonus track.

You can buy it here.

The LP released on Arista/Freedom and on Debut was released in England on the Fontana label ('Ghosts' -- Fontana SFJL 925).