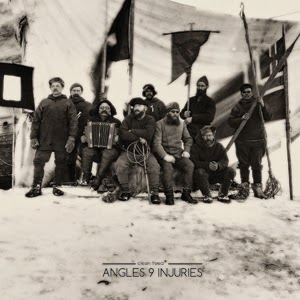 It’s no secret that saxophonist and composer Martin Küchen and the various incarnations of his Angles group are quite beloved on the Free Jazz Blog. Not without reason since it can seem, at times, that Angles under Küchen’s guidance really are incapable of producing mediocre music. “Injuries” is another release by the Angles nonet, Angles 9, and the musicians and their music remain as wonderful as they’ve ever been.

Martin Küchen and his cohorts present us with big band music that frames grand and expansive moments within minimalist and quite improvisational borders. It is exhilarating, shiver-inducing music, but with a contemplative and spiritual thread passing through it. Imagine that: free, improvised music that you can almost hum and dance to! The record can feel so musical and uplifting at times that you’ll feel guilty for enjoying it so much. And yet, the music never even comes close to being corny or tacky. Instead, it successfully bridges intellectually challenging and emotionally fulfilling sonic dimensions. This is especially evident when the band is at full force, when an incredible energy and passion, a certain pathos almost, starts sweeping over the listener. A pathos that is easily associated with the message that lies in the background. A message that can be interpreted as a warning and a plea for peace, a message that is akin to the voice and ideas behind Charlie Haden’s Liberation Music Orchestra. Simultaneously, African and Latino rhythms that lurk between the lines, the syncopated drumming, and blaring horn section might remind us of African musicians such as Mulatu Astatke. It all amounts to charged and powerful music, plain and simple.

Take the opening “European Boogie” which booms and swings in the vein of early free jazz, the beautiful “Eti” that is opened by a progression on piano and vibraphone only to be joined by a full-bodied horn section which will send shivers down your spine, “Ubabba” which rocks along with remnants of afrobeat and an inherent sense of joy, or the title track “Injuries” which is a vibrating, nervous, and piano-dominated almost free improv track... There’s something special to be found on each track and hardly any negatives. The only thing that might bother some is the accessibility and a mirage of mundanity of the music, but this is easily and quickly forgotten once you dig into the music and completely fathom the ease with which the band manages their performance. They take simple, memorable themes, and develop the tunes around them, leaving ample space for improvisations which mostly come in the form of interludes between louder, busier group efforts. The rhythm section can feel rather straightforward, but this is down to the somewhat strict role it has in maintaining the band’s cohesiveness. On the other hand, the wind section emerges as the main carrier of themes, introduced quite often by the vibraphone and piano. While a certain level of homogeneity is required and upheld, the musicians are actually given many chances to express themselves. Based on the performances, it would actually be unfair to single out any of the musicians here since they all make significant contributions to the music, both as parts of a whole and as soloists.

I feared, before listening to the album, that recording in a studio rather than in front of a live audience would somehow diminish or harm the rendition of Angles 9’s music. Fortunately, my fears were unfounded since the warmth and exhilaration in their approach are as present as ever and there’s not a sign of straying from the energy that they exhibit while performing live. In closing, I can only say that instead of reading this review you should already be listening and experiencing “Injuries” by yourself. It’s the only way to fully understand.

I can only support everything you said, Antonio. As additional information one might mention that the album is available on double vinyl and CD and that you can listen to an album teaser here: https://www.youtube.com/watch?v=rGEqjBBQD1A

Fully agree + I embedded the trailer video. Thanks for pointing it out, Martin!

One of the best albums of the year!