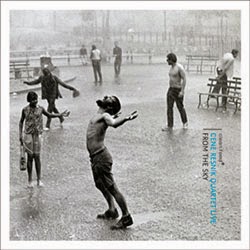 Cene Resnik is a tenor saxophone musician from Slovenia, a student of artists Archie Shepp and Joe Zawinul, whose teachings, combined with Resnik's own Buddhist beliefs, have resulted in a sound that is a fusion of free jazz, hard bop, and Slovenian culture.  He leads a quartet on his debut album for Clean Feed, From the Sky, which is full of promise and solid playing.

The opening track, "Red Mango," shows Resnik's influences, with a strong, full bodied sound, at times lyrical, others atonal, not unlike Coltrane in his later years, yet lacking his power and fervor.  Emanuele Parrini's violin's is very evident -- angular, a mixture of Django Reinhardt and Billy Bang; Giovanni Maier's strong plucking on bass; and Aljosa Jeric providing powerful drumming.  Throughout the album they demonstrate a versatility, between the skronk and the lyrical, as half of the album's six tracks break the ten minute mark, giving the artists ample time to stretch out.

The compositions aren't very strong -- they show more influence of others than their own unique take -- they are well performed, and sustain interest.  Standout tracks are:  "We Dance," the shortest track on the album and the most energetic, with Resnik and Parrini trading off leads while Maier and Jeric deliver a scorching rhythm section.  "Riverbank" is another fiery track, all musicians deploying their arsenal of sounds in another five minute noisefest.  From the Sky is a nice debut for this Quartet, Resnik showing strong influences from 60's-70s era of free jazz.