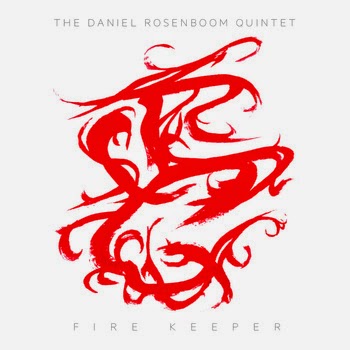 Readers be warned: the following album is firmly planted in the jazz-rock fusion category - though there is plenty of freedom to be found within these well crafted tunes...

Atmospheric melodies, biting guitar lines, driving complex rhythms all come together so seamlessly and fresh on Daniel Rosenboom's Fire Keeper that you might think the style was (re)invented here. Rosenboom is a trumpeter and composer from LA, he first came to my attention with his work with the woodwind master Vinny Golia a few years ago. We find him now starting the label Orenda and releasing this fiery album that pulls together often misused musical elements and puts them to good use.

The album kicks off with 'Leaving Moscow', which begins with the trumpet spinning an ethereal melody, but it is quickly picked up and inverted by Alexander Noice's incisive and crunchy guitar work ... and right here is where I throw in the cliche: it rapidly becomes some high octane music. The guitarist keeps the engines revved on the nervously twisting intro to the follow up track 'Seven on Seven'. Drummer Dan Schnelle and Bear Trax player Kai Kurosawa lock in tightly, keeping things moving along, even during the breakdown. Appearing about halfway in, the track splinters into free playing, and the guitarist delivers another combustible performance. Metallic touches from Gavin Templeton's flute also provides some nice texture. Deliberately primitive drumming and muted wailing trumpet change the album's direction a bit on 'With Fire Eyes', a track that digs deep into some heavy jazz-rock sludge. Other tunes, like 'Hush Money' starts off with a glam rock like intro only to find the stomping rhythm be festooned with knotty melodic passages.

It's not smooth, it's not forced, it's not free jazz and it's not really avant-garde, rather Fire Keeper is a wonderfully fresh take on the maligned f-word genre, and to my ears it's an album that shows how much life there still is in it.

Enjoyed that. Funkeee (another much maligned f-word). Even better, watch this: