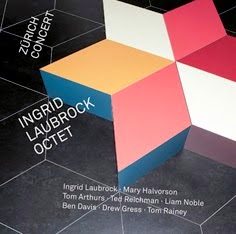 The Zürich Concert is a slowly unfolding and unpredictable album from saxophonist Ingrid Laubrock. Recorded after a Südwestrundfunk (German public radio) sponsored opportunity to work with cohorts from New York and London, the Ingrid Laubrock Octet's Live in Zurich was recorded at a subsequent tour date. The group has a cast of musicians drawn from Laubrock's other groups like Sleepthief, the Tom Rainey Trio, along with others. Like these other combos, the octet works intuitively with each other - and with such a large group at her command, this doesn't seem like a small task to manage.

The first three tracks, the short 'Glasses', the long 'Novemberdoodle' and the again short ‘Blue Line & Sinker’ seem to form a tenuous and deliberate first movement. The sound is dominated by Ted Reichman’s accordion and Tom Rainey’s melodic lines on the xylophone. The atmosphere of ‘Novemberdoodle’ is delicately punctuated by light plinks from the guitar, piano, and xylophone, with some melodic intervention from the horns. Laubrock's approach to the octet is to use the instruments in smaller units and leaving plenty of musical space between the players, and it's quite effective.

Changing the atmosphere, the track 'Chant' has guitarist Mary Halvorson with a long solo introduction. She is joined by the group at times to underscore the passages and add a bit of intensity - the scoring of the soprano sax, along with the sonority of Ben Davis’ cello, and the striking piano playing of Liam Noble is a delight. 'Matrix' begins with Rainey’s drums and Drew Gress’ bass creating a skittish foundation for some noisy blowing by Laubrock. Tom Arthur’s trumpet cuts a fine melodic line later in the track and a section towards the end of the track is both delicate and playfully frenetic.

The overall recording is a smart assembly of varying textures and approaches and the diverse instrumentation makes for a fascinating listen. This is an album to take in whole, spend the hour and fifteen minutes that it demands to follow the ideas as they slowly appear and cohere.

I have been thrilled by Ingrid Laubrock's musical development these past few years. The first Anti-House album really hooked me, and she's been experimenting and stretching and growing, and this new album is fantastic.

Glad to hear you like it - it's certainly different than Anti-House but still has the qualities that makes her music so engaging.

Agreed. Taken in whole, there is an emerging Laubrock sound world. Octet, Anti-House, and Paradoxical Frog in particular, seem to speak a common language.