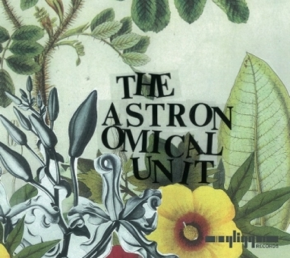 Compared to the almost classical free jazz approach of the Foils Quartet, The Astronomical Unit is much more interested in sounds and textures. Müller and drummer Christian Marien had been playing together for some time, before they were joined by jack-of-all-trades Australian bass player Clayton Thomas, who had moved from Australia to Berlin in 2007 to become a crucial member of the Echtzeit scene (just recently he returned to Australia, which is a major loss for the Berlin network).

On their second album (“Relativity”, the first one, was released by Jazzwerkstatt) the band immediately indulges in a labyrinth of drones. Especially Müller and Thomas, whose extensive use of material like license plates or metal rods which he puts between the strings, build up a really gloomy but also subtle and tense atmosphere. Sometimes they sound like a brooding volcano, there is a constant rumbling, a sensation augmented by Marien adding little dots of sounds, which he achieves by using a whole arsenal of different utensils. Müller is totally himself, snorting, steaming, puffing and chuffing, while Marien’s various drum sounds push the music forward.

Especially the second track, “Anti Matter”, lives from the contrast of Thomas’s bass buzzing (particularly his bowing), Müller’s circular puffing and flapping of single notes and Marien’s extended techniques (like the scratching of the cymbals), it sounds as if you were in the interior of a huge ship which scratches along a quay wall. The piece rattles and vibrates that it is pure joy to listen to. There is hardly any groove or pulse, only at the end of the track there is a deconstructed tribal beat which makes a nice contrast to the rest of the album.

The trio’s tightness, their homogeneity and their finely engraved way of playing make their approach to improvised music so unique, they combine the tradition of American free jazz and improv with the European structural focus.

A very interesting and challenging listening experience – I would like to listen to them in unusual locations like churches, caves or old industrial facilities.

Listen to them here.