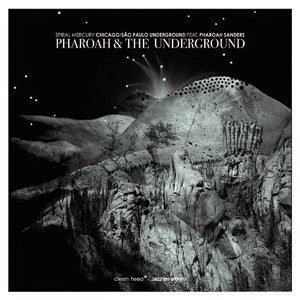 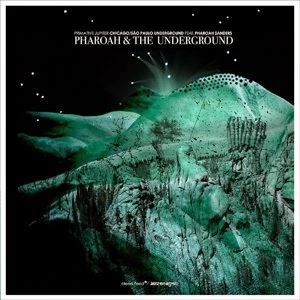 'Summit Meetings', 'All Star' groupings and much hyped ad-hoc combinations, the Jazz world has used these devises as marketing tools for time immemorial. Given this, Mazurek's approach to engaging with Free Jazz's first generation is to be commended. His association with Pharoah Sanders, the third such project he has undertaken (previously his Exploding Star Orchestra was joined by Bill Dixon and Roscoe Mitchell), stretched over a two year period and the resulting dynamic is a finely honed relationship showcasing the strengths of each horn, with both able to exert considerable influence on the direction of the music.

To accredit these releases to Pharoah & The Underground is somewhat of a misnomer as Mazurek is the lone compositional voice here, utilising thematic material from both the Sao Paulo & Chicago Underground in addition to his Pulsar Quartet, alongside new compositions. Stylistically they read as an extension of his recent work with the Exploding Star Orchestra/Electro-Acoustic Ensemble and a re-contexturalising/stretching of elements from both Underground projects, an approach not dissimilar to last year's excellent 'Skull Sessions'octet. Here Sanders and Mazurek are joined by Chad Taylor, the cornetist's foil in the Chicago Underground, Mauricio Takara and Guilherme Granado of its Sao Paulo counterpart, and Matthew Lux from the Pulsar Quartet, Mandarin Movie & Isotope 217. All four have been involved with recent incarnations of the Exploding Star Orchestra, their familiarity with each other is evident throughout.

Recorded live in concert at Lisbon's Jazz em Agosto Festival (August 11th 2013), the Spiral Mercury CD presents an unbroken 77 minute suite, which moves between high energy grooves, turn-on-a-dime themes, modal progressions and open, freely improvised areas. Mazurek & Sanders provide a carefully balanced dovetailing of approaches, the cornet often the more piercing and 'out', the saxes providing a softer, more melodic edge. When the energy of the music dictates, the septuagenerian duly matches it with patented screeches and penetrating tones, but throughout, his long velveteen lines dictate play as often as Mazurek's sharper blasts and flurries. That Primitive Jupiter LP opens with the ostinato of 'Spiral Mercury' (alongside 'Asasumamehn', one of the 2 tracks repeated across both releases) is maybe the only factor to recommend the CD over the LP, the way broken motifs from the theme are introduced in the closing moments of the preceding track is missing from the more judiciously edited wax incarnation. But for those with an interest in Mazurek's trajectory, or fans of Sanders' increasingly infrequent output, both are mandatory.

The combination of Taylor and Takara on drums and percussion ensure a pronounced rhythmic foundation for much of the performance, with a Latin edge lent to the propulsion, unsurprising given the inclusion of the Brazilian contingent. The perpetually bubbling bed of fractured electronics recasts the afro-futurist settings of Sanders' 'Thembi', and his work with Alice Coltrane, into the post-cosmic future-jazz nebula Mazurek has been navigating during recent voyages. Takara's use of cavaquinho ensures he never encroaches on the low-end register of Lux's territory, whilst giving ample space for Granado's keys to move in-between. Throughout, elements central to both Underground projects are in play but repurposed in this longer setting. In fact, the musical omnivorousness of these groups makes perfect sense in this context, here this approach is given the time and space to contribute fully to a larger whole. Whether devotional rhythmic grooves, searching abstraction or full-throttle velocity, the interaction between the musicians is never less than adroitly judged, simultaneously casting a glancing eye backward whilst straining for the farthest reaches of the cosmos. As The Art Ensemble would have it, "Ancient to the Future."

Given the length of their partnership, its not overly expectant to hope for more recordings of this caliber to surface. "Tell this to everybody, wherever they are… Keep watching the skies."

Instant classics? The Wire magazine includes both in their Primer article on Pharoah Sanders, detailing his essential recordings in the September issue 367.

This is really growing on me. I could listen to that groove in the middle of "Jagoda's Dream" for an eternity...