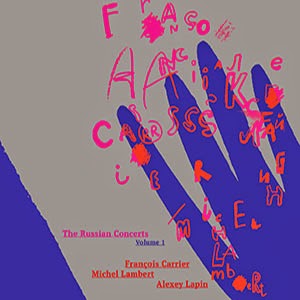 I love listening to music while driving my car, as I did yesterday between Paris and Brussels, and when somewhere north of Compiègne the entire motorway was blocked, for reasons I will never know, but can only fearfully guess, the trip suddenly turned into a four-hour snail-paced procession. A good moment to listen over and over to this beautiful album, exactly the music I needed to lift my spirits.

A meeting between Canadian musicians François Carrier on alto and Michel Lambert on drums, and Russian pianist Alexey Lapin, three musicians who have performed together before, as you can read on this blog in earlier reviews.

The performances on this album date from 2013, recorded during two consecutive days in Moscow, first in the DOM Cultural Center and the second at the Nikitskaya Jewish Cultural Center, which explains the titles of the songs.

All pieces are improvised, even if you may have doubts at certain times. The trio is a formidable match of like-minded musicians. As mentioned before, Carrier is an incredible lyricist, a saxophonist with a warm and buttery tone to his instrument, able to conjure up beautiful and sensitive phrases that soar high above the world of us mortals. As mentioned before, Lapin is an incredible lyricist, someone who joins creativity with openness and sensitivity. Michel Carrier is of the same breed, who in the best tradition of Paul Motian, acts as the third soloist, creating sound, depth, texture, intensity, contrast and emphasis with his drumkit.

When the three come together, magic is in the air. They have the expansiveness of a Coltrane, creating music of high skies, far horizons and space that can be filled, or rather space that is created through sound, that is expanded through sound, that opens up limitations, that breaks barriers and constraints, that musically delivers all the promise that is contained in the word "freedom". It has some references to the post-boppish style of Jarrett's New York quartet, yet more modern, more free and open in its approach.

This is music of great beauty. And even if you are stuck in a car somewhere abroad, when you listen to music like this, the world opens, and even if you move at the pace of a snail, you feel like an eagle, flying along like the music, out there in the open skies, where nothing, absolutely nothing, hinders your flight.

Thank you François, Alexey and Michel for making this a memorable drive back home!

I can't wait to hear Volume 2.

Stef, thank you SO much for your sensitive spirit and such a warm and touching review of our album.