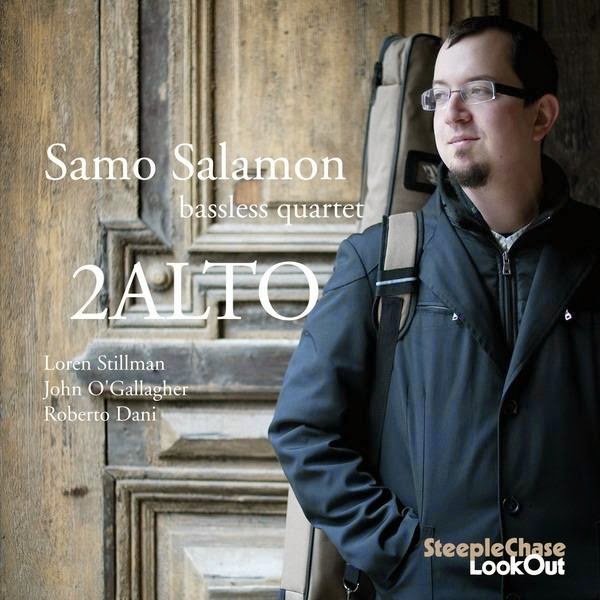 This is a bassless quartet of guitar (Samo Salamon), 2 Alto Saxophones, (Loren Stillman, John O’Gallagher) and drums (Roberto Dani).  It might seem a bit obvious and irrelevant to say that the bass isn’t missed as an instrument within this sound, but in the context of the music it is well covered for, especially by Salamon’s guitar.  Needless to say that Salamon’s role within the group quite frequently is that of a supporting role, although there are solos and lead breaks where he stretches out or experiments with effects.  He is a wonderful guitarist and I enjoy hearing him play freely within a group setting, which he still finds the time to do within this music outside of the stricter supporting role.  This is particularly noticeable in the piece “Mr Cynical” where his guitar roams freely during a solo making the sounds that every great free jazz guitar solo should.

The album opens with solo guitar playing a cadenza-like interlude, but before any other music has been heard.  The horns then enter producing overlapping question and answer phrases in a linear piece with three clearly defined sections whilst the music gradually becomes a little freer in texture, but with Salamon providing a clear harmonic support.  The first couple of pieces seem a bit restrained at times and on first listen I wondered if this would set the tone for the whole album.  Thankfully though there is more room for manoeuvre in some of the other pieces, which allow the musicians to experiment a bit more and take a few more risks, as mentioned afore “Mr Cynical” being one of these pieces, and “Imperfections” another, where apart from the themes there is a loose improvised feel to them that allows them to breath more naturally.

At times, but not often, Salamon liberally uses some effects on his guitar sound with “Man of Mystery” being an obvious example, the sound being heavily processed to produce an electronic sounding object that appears as an introduction to the rest of piece which has a funky vibe to it.  These little moments do stand out and give the listener something different in contrast with the rest of the album.  “Flux of Silver” sees the guitar playing with delayed effects, which produces a pleasant and slightly minimalist repetitive accompaniment to the alto melody, which unfortunately doesn’t seem to develop into anything more than that.

It took a while to fully appreciate what is on offer here within the music of the album.  All I can say is that it creates for an interesting listen and the sound seems nicely balanced with some fine playing from all the musicians.  However, I do feel that at times some of the pieces do feel quite restrained and the most successful moments are when the music is much freer.  If you haven’t heard a Samo Salamon album yet, then I’m not sure this is the best place to start and I would recommend his album “Two Hours” which I feel is a much more consistent affair than “2 Altos”.