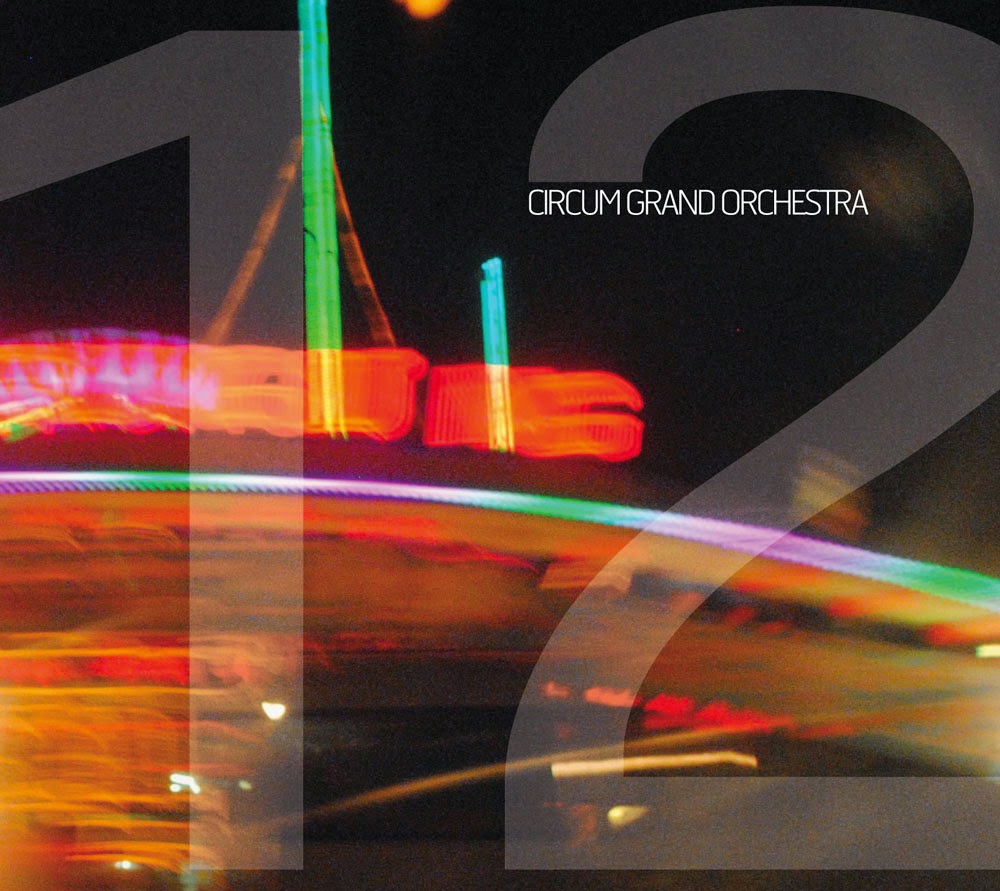 For a while it seemed that the big band format in creative and adventurous jazz was slowly fading into oblivion. The economic situation was and is not favorable (culture somehow always gets the short end of the stick) and there are various, often insurmountable challenges and problems when composing and creating music for such groups. For many musicians, the effort is either just not worth it or they feel that the needed inspiration and creative catalysts have been depleted. When two years ago Peter Brötzmann announced that he was retiring his Chicago Tentet, the future looked bleak. But here we are, in the final third of 2014, and a multitude of great big band albums have already been released in the past 9 months. Lille’s Circum Grand Orchestra, a sort of supergroup or collective comprised of musicians gathered together under the Circum label, make an interesting and fresh proposition with their new album “12”.


There are two guitars in this band, but before you get a chance to call it “rock influenced” or even “fusion”, you realize that the only thing borrowed from rock here are the energy, the bite, and some rhythmic patterns. Indeed, the electric guitar is used in a nuanced and clever way, sometimes hinting at fusion, but never crossing into kitschy territories. And this is only natural as the core of this record stems purely from free jazz and improvisational origins. Yes, the songs are composed because it’s hard not to have at least some sort of foundation when dealing with large groups. Yes, the band follows some predefined patterns and sections. But the structures are only loosely set, leaving a lot of space for the musicians’ improvisations and experimentations. Basically, it’s authentic big band (free) jazz with elements from various genres mixed in, performed with a sense of flow and joy.

Music that is not afraid to wear various motifs and influences on its sleeve. Circum Grand Orchestra take the middle road between accessible, easily enjoyable jazz and intricate, contemplative improvised segments. Especially striking are the duos and dialogs that take place between different combinations of instruments throughout the tunes. Even though it’s a large ensemble (two guitars, two basses, two drums, a piano, a five-piece brass section with saxophones, trumpets, flugelhorns, clarinet, and vocals), each musician has a distinct, individual voice, but it also completes and complements all others. There’s so much airiness and space in the music, pensive moments that makes you feel, at times, as if listening to merely a trio or a duo. The band works great whether everyone’s playing with full force or improvising within a smaller subgroup. What this dual paradigm means is that you’ll start following an infectious, swinging melody or a rhythm only to wind up in an improvised section carried on by two or three instruments and their sparse notes.

Bassist Christophe Hache, who takes over leadership and compositional duties from Olivier Benoit, claims that the compositions were inspired, peculiarly, by French chansons. This can be heard throughout the album, more on a subtle, structural and inspirational level rather than in the form of pure expression. Whether you’re listening to the opening “Tan son nhat”, that right away shows what the band’s capable of with a massive, imposing sound, or to a quieter track like “12”, the music is consistently captivating and beautiful. The highlight of the release probably comes on the aptly titled “Graphic”, a song featuring an awesome build up and groove, dissonant vocals, and a rather loose approach confined by composed parts. Yet, there’s a feeling that improvisations and solos build the structure of “Graphic”, not the other way around. This tune also shows Circum Grand Orchestra’s remarkable ability to remain cohesive during the busiest sections. But there are many surprise on the other tracks too, from giallo atmospheres on “Padoc” to songs dominated by rhythm (“Principe de précaution”) and noisy, Bailey-like guitar solos (“Hectos d'ectot”). Production is luckily great and makes the music shine even further. The sound is punchy, clear, and airy, regardless of the number of instruments playing concurrently. Really, the only criticism that I can think of comes from the fact that the musicians and the band as a whole don’t take many chances or risks and are often content to remain on the melodically and rhythmically defined “safe” side of things. Maybe not a record that will astonish you with something new, but a highly enjoyable and fulfilling accomplishment.