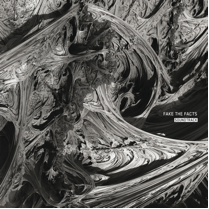 When I read novels I often do this with music on, usually just to have a constant background noise which helps me not to lose my concentration since I am easily distracted by other noises - from adjacent apartments, for example. At the moment I am reading Donna Tart’s new novel “The Goldfinch” and lately I chose Fake the Fact’s new album “Soundtrack” as background music. Parts of the novel take place in Las Vegas, especially on the outskirts of this city. There is a passage which describes the place like this:

“I was not aware quite how eerie Canyon Shadows got at its farthest reaches; a toy town, dwindling out at desert’s edge, under menacing skies. Most of the houses looked as if they had never been lived in. Others – unfinished – half raw-egded windows without glass in them; they were covered with scaffolding and grayed with blown sand, with piles of concrete and yellowing constructing material out front. The boarded-up windows gave them a blind, battered, uneven look, as of faces beaten and damaged. As we walked, the air of abandonment grew more and more disturbing, as if we were roaming some planet depopulated by radiation and disease.”

After a while, “Soundtrack” did indeed become a soundtrack to the pictures my imagination produced while I was reading – in this case to a somewhat David-Lynch-like film.

In the context of this “film in my head”, a track like Polyphony of a Metropolis functions as a close up of the life in the sand surrounding Las Vegas, the bugs crawling busily (guitar), the snakes winding their way through the deserted estates (baritone sax), the sun (computer sounds) burning down relentlessly on the whole scene.

The musicians (Mats Gustafsson on saxophones, Dieb13 on turntables, Martin Siewert on guitar, and electronics) are like cameramen, bringing to life this scenery with the possibilities of analog electronic sounds. The opening track, Socks full of Sawdust, is like an echo of a lost civilization – full of tattered guitar static mixed with electric rubble, vinyl scratching and bar piano samples – but the hectic saxophone interspersions already cast the shadow of the future disaster.

As usual when he is more into sound explorations, Gustafsson hardly blows his horn; it is more of a dark gurgling trickle, while Siewert's guitar sounds like nerve impulses of the brain. Meanwhile, Dieb13 maps an electric universe – it‘s a cosmic playground of sounds stripped down to its bare bones. “Soundtrack” is indeed cinematographic music, in a fascinating and horrific sense.