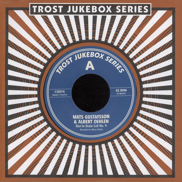 To kick off their new “Jukebox Series”, Trost Records provide us with a single pairing up the jubilarian with German painter Albert Oehlen. It’s certainly a somewhat unexpected collaboration; but then again, Gustafsson is a restless soul, constantly looking for new challenges, constantly seeking to push the envelope – so why not team up with someone from the visual arts? Besides, Oehlen is no complete stranger to the world of music. In the 80’s, he was part of the Neue Wilde art movement – alongside enfant terrible Martin Kippenberger – which had close ties to German punk/NDW music. Moreover, he’s worked together with German free jazz musician Rüdiger Carl.

Here, Gustafsson and Oehlen find common ground in a “deliberately indeliberate” method; the single’s two tracks are the outcome of a somewhat inscrutable creative process, with the two collaborators warping each other’s contributions, sometimes beyond recognition. The only thing we know for sure is that Gustafsson plays (baritone?) sax, while Oehlen adds a violin’s violent caterwauling (some non-assignable extra noises such as percussion and hollering are thrown in, as well). The cleverly-titled Riot in Brain Cell No.9 is the first of these two tracks: True to its title, it eschews any semblance of sustainable structure, attacking the listener with a series of low-pitched saxophone honks and screeching violin. Intermittently, a martial (or carnival-like, depending on your interpretation) drum roll crops up, cheered on by background hollering. Three minutes in, the racket suddenly stops, but after only a few moments of silence, the violin grinds on for another two minutes. This is “rough music” in the truest sense of the word. On the flipside, Dirty G-String Boogie presents what appears to be a remix of sorts; some of the first track’s elements crop up once more, but this time, they’re half-heartedly incited to a dance by restrained electronic beats.

While it’s over before the riot can spread to the “entire prison”, this is nonetheless a fun record and a fitting way to celebrate Gustafsson’s “big” birthday (and Oehlen’s too, as I’ve just realized!).

Oehlin is a very fine artist, particularly his finger paintings. Try a Google search of his name and "finger paintings". Not entirely convinced with his contribution here, however.

Here are some specific links:

Oehlen also wrote for the German SPEX magazine in the 1980s, together with people like Diedrich Diedrichsen. That's how I got to know him.