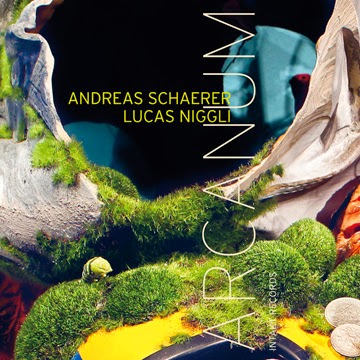 Swiss drummer Lucas Niggli is one of the lesser known drumming greats working in avant/improv music right now. Despite collaborations with Barry Guy, and a trio recording alongside Elliot Sharp and Melvin Gibbs, he still seems to be largely unknown to listeners outside of Central Europe. This contrasts with the often outstanding quality of his contributions, and witnessing him play with his Avant-Rock/New Music trio Steamboat Switzerland should suffice to convince anyone of Niggli’s supreme abilities. But it would be unfair to focus attention solely on Niggli, as the record to be reviewed here is not a solo effort. His musical partner here is Andreas Schaerer, who happens to be an interesting musician in his own right. He works primarily as a vocal artist, which is to say here that he’s more interested in mimicking all kinds of noises than in “singing”, which he does only occasionally. As a duo, they create experimental music that’s not without a sense of humor, sometimes fast-paced and jumpy, sometimes slow and moody, but always with a Dadaistic playfulness.

Comparisons to Mike Patton are almost inevitable at this point, but arguably, Arcanum is a more interesting and consistent proposition than many Patton-related projects, which are often marred by a somewhat gimmicky approach to music-making. While opener Pipe Tomahawk kicks things off in the most Patton-ish way imaginable, with Schaerer alternating between siren-like and animalistic noises, and Niggli indulging in a wild, constantly time-shifting drum workout, the record as a whole is more varied and subtle than this single track would lead you to believe. Take, for instance, Ancient Glow and Arcanum, two tracks that emphasize the duo’s quieter side, with melancholy drones and vaguely Middle Eastern vocalizing creating an immersive listening experience that’s a far cry from jokey and deliberately weird “experimental” music. Or consider Marblecore, which, for all its “weirdness” – Schaerer’s multi-tracked voice starts to sound almost like a choir of pigeons performing baroque music – is in fact surprisingly and sincerely beautiful.

The duo’s greatest strength is probably the avoidance of a tendency to promote weirdness for its own sake, instead favoring an almost child-like approach. Indeed, this record exudes the genuine sense of wonder of a child who, upon discovering a “treasure chest” in the attic, attempts to figure out the meaning and function of all the arcane objects contained therein. It’s an imaginary journey around the world, leading to many unfamiliar places far apart from each other, both geographically and temporally.

Listen and buy a the label.

Thank you for your review, Julian.

I had a pleasure to watch and listen to Lucas Niggli last four days during Cracow Jazz Autumn Festival when Lucas played in Barry Guy Blue Shroud Band. First three nights with band members in different constellations and with full orchestra Friday night. Every time Lucas was delivering very imaginative, creative and stunningly colorful playing with - indeed - great sense of humor. And as a person Lucas is nice witty guy too.

Need to look for his records.